France is a wonderful country with tons of places to visit, whether you like nature, culture, history, cities and so on, you’ll always find something to your taste. Paris is France’s main destination, but where to go once you’ve visited it or if you simply don’t like being surrounded by hoards of tourists? Check out these great alternatives and top cities to visit in France, perfect for a second trip to France or just if you want to go beyond Paris and discover more of France.

Apart from Toulouse and Nice in Southern France, you can visit all of the other cities listed below as a day-trip from Paris.

Top cities to visit in France

France’s fourth biggest city, Lille is believed to have been founded in 640 by two giants. The first written evidence of the city dates back to 1066, but the city only became part of France in 1667. Lille historic center is proof of the city’s rich past and is an architectural gem. For all the beauty of the historic center, Lille is the perfect blend of traditions and modernity.

Best places to visit in Lille

There are tons of places to visit in Lille, some, part of the UNESCO World Heritage List, most of them located in the Vieux Lille (Old Lille). Here are the city’s main attractions:

The city’s Tourism Office offers walking tours in English of the Historic Center every Saturday at 10:15 AM (13 euros). The tour starts in front of the Rihour Palace.

What to eat in Lille

The local dishes you must try are the Welsh (beer-marinated bread, grilled with ham, mustard, and cheddar) and the Cramique, a type of sweet bread (you’ll find the best ones at the Boulangerie Brier).

How to get to Lille

From Paris Nord train station, a TGV train will take you in under 1 hour to Lille, so you can even just go as a day-trip from Paris.

Reims is famous for its UNESCO World Heritage Cathedral that’s definitely worth a look as well as the whole historic part of town. Reims is one of France’s oldest city, it used to be an important place during the Gallic period, even before the Roman conquest. Traces of all the civilizations that passed through the city can still be found, making Reims a great place if you like history and architecture.

Best places to visit in Reims

For more information, you can check out the Reims Tourism Office’s website.

What to eat in Reims

Reims is a city recognized for its gastronomy, you will find 5 Michelin-starred restaurants and plenty of cheaper alternative. The best place to try local food is the Bourlingrin market (Wednesdays, Fridays, and Saturdays morning).

Local delicacies include the Jambon De Reims (Reims’ ham) and the Biscuit Rose or Rose cookie (rose as the color, not the flower), you can find the best ones at the Maison Fossier, it can be eaten alone or dipped in a cup of champagne. Reims being at the heart of the Champagne region, you cannot miss the opportunity to drink Champagne. If you spend a few days in Reims, you can also visit a vineyard (or a couple).

How to get to Reims

From Paris Est train station a TGV will take directly to Reims’ city center in 45 minutes.

A medieval city, Metz is full of historic landmarks that are worth having a look at. Strolling around the historic center, passing through paved streets and gothic edifices, a visit to Metz makes for a great day-trip from Paris. You can also spend a few days and explore the stunning Lorraine region or nearby Luxembourg.

Main places to visit in Metz

Metz Tourism Office has put together an app so you can visit the city and its surroundings on your own. It’s in English and it doesn’t require the internet once it’s downloaded. Download it here on the App Store or here on Google Play.

What to eat in Metz

You probably already know the region’s most typical dish: the Quiche Lorraine, a dish you absolutely need to try in Metz. On the sweet side, the region makes France’s best mirabelles (small yellow plums), so try a mirabelle pie or any deserts with it. They also make a great Mirabelle liquor.

How to get to Metz

From Paris Est train station you can catch a TGV to Metz, it takes around one hour and a half.

Strasbourg is a unique city in France, its architecture is so different and so beautiful, it would be one of my top picks for cities to visit in France. Just walking around, along the canals, one can’t get tired of looking at the traditional houses and buildings. Strasbourg Historic Center is known as La Grande Ile (the Big Island) and is a UNESCO World Heritage Site.

Best places to visit in Strasbourg

What to eat in Strasbourg

Alsacian gastronomy is recognized as excellent all over France, the famous Choucroute is one of its emblems (cabbage and sausages, you can get a vegetarian option). The best type of restaurants to try local dishes are the Winstubs you’ll easily find in the historic center. You shouldn’t either miss the wine, one of the region’s specialties.

How to get to Strasbourg

From Paris Est Train station catch a TGV to Strasbourg, you’ll be there under 2 hours.

Rich in history, Dijon used to be the capital of the powerful Dukes of Burgundy and is one of the top cities to visit in France. The historic center is incredibly well preserved and full of spectacular edifices. Make sure to stop at the tourism office where they’ll give you a walking tour map.

Main places to visit in Dijon:

What to eat in Dijon

We all know Dijon Mustard, and if you want to learn more about it or even learn to make it, head to the Moutarderie Fallot, the only place where they still make it the traditional way. Gingerbread is also a local delicacy, you should try the Nonettes, cookies made with gingerbread, orange marmalade, and honey.

If you like cheese, try the Époisse, made with cow milk and refined with grape eau-de-vie.

How to get to Dijon

From Paris Gare de Lyon, take a TGV to Dijon, you’ll be there in less than 2 hours.

Lyon is known for its Light Festival (Festival des Lumières) which takes place every year at the beginning of December. All of the city’s main buildings are illuminated with intricate designs. Even if you can’t make it to the festival, Lyon is still worth a look. Lyon is a vibrant city where you’ll find something to do to anyone’s taste. From monuments and museums to nightlife and gastronomy, the city has it all.

Lyon’s origin date back to the Gallo-Roman period, walking in the Vieux Lyon (Old Lyon), you’ll be able to see traces of all the civilization that past through the city. Most of Lyon is a UNESCO World Heritage Site.

Main places to visit in Lyon

What to eat in Lyon

Deli meat is the city’s main specialty from Rosette to Brioched Saucisson, you’ll find all types of dry ham and such. Another typical dish is the Salade Lyonnaise (lettuce with lards and a poached egg). If you like cheese you should try the Saint-Marcelin. On the sweet side try the Praline Pie, it’s unique and delicious.

How to get to Lyon

From Paris Gare de Lyon take a TGV to Lyon, you’ll be there in under 2 hours.

Nice is one of the top cities to visit in France. It’s a great city and the door to the Province region. Apart from visiting the city, there are tons of things to do nearby, involving incredible landscapes and unique experiences. The city’s origins date back to the antiquity, strolling around the city center you’ll be able to see how traditions and modernity blend perfectly.

Main places to visit in Nice

What to eat in Nice

Salade Niçoise needs no introduction, you definitely have to try the original one when you’re in Nice. You should also try Socca, a type of pizza with the dough made of chickpea flour, and the Pissaladiere, a type of quiche.

How to get to Nice

From Paris Gare de Lyon you can catch a TGV to Nice, it takes 5 to 6 hours. Alternatively, you can fly from most major European cities.

Nicknamed the pink city, Toulouse is a bubbly student city where you’ll find plenty of bars and restaurants, and an interesting cultural scene. Toulouse is the door to the Occitanie region, which will allow you to witness a different culture and traditions.

Main places to visit in Toulouse

What to eat in Toulouse

Deli meat is a local delicacy, you’ll find the best one at the market, try the Jambon de porc noir de Bigorre (Bigorre Black Porc Ham), the Toulouse sausage and the Goose Foie Gras. On the sweet side try Fenetra (almond and lemon cake) and Violettes candies.

How to get to Toulouse

You can catch a TGV from Paris Montparnasse that will take you to Toulouse in 4 hours, There are slower one leaving from Paris Gare de Lyon.

Bordeaux is a top city to visit in France. Famous for its delicious wine, the city has a lot to offer as a tourist destination. Getting lost in the UNESCO historic center’s small streets, visiting museums and centuries-old churches, trying the local delicacies, you’ll fall in love with Bordeaux.

Main places to visit in Bordeaux

What to eat in Bordeaux

Of course, one of Bordeaux’s main specialty is wine, try to visit a vineyard if you can or go to a wine tasting. You’ll also find some of the best oysters there as well as delicious beef, with the famous rib steak served with its Bordelaise sauce. For dessert, you cannot miss the Canelé, one of my favorite French sweet, you’ll find the best ones at Baillardran or La Toque Cuivrée.

How to get to Bordeaux

From Paris Montparnasse you can catch a train that will take you to Bordeaux in 2 hours.

Tours is mostly left aside by international tourists and they’re missing on something great. Less than an hour away from Paris, the city has a lot to offer. The historic center is stunning and the gastronomy delicious. Tours it’s also a good base-camp to visit the many nearby castles.

Main places to visit in Tours

What to eat in Tours

Like most typical dishes in France, local delicacies include meat and cheese. The first ones you should eat are the Rillettes de Tours (a type of paté), the Rillions (spiced pork confit), and the Andouillete (sausage). For the cheese, you can’t miss the Sainte-Maure (goat cheese). On the sweet side, try the Nougat de Tours (a cake), the Fouace de Rabelais (brioche) and the Poire Tapée (which translate to beaten pear).

How to get to Tours

From Paris Montparnasse, you can catch a TGV that will take you to Tours in about an hour.

Some French vocabulary to know when visiting France’s top cities

Related articles to help you plan your trip to France:

Like it? Save it for later – Top cities to visit in France: 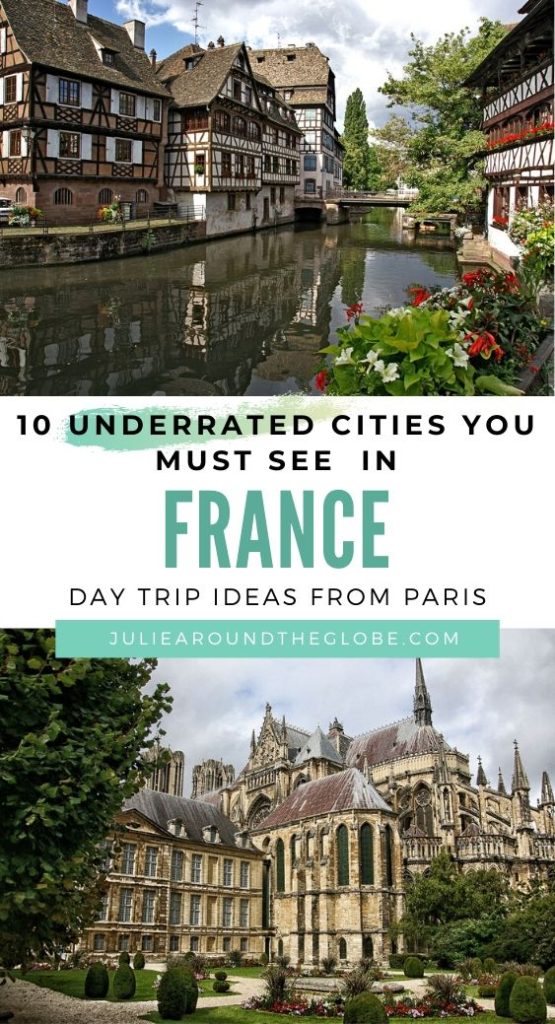 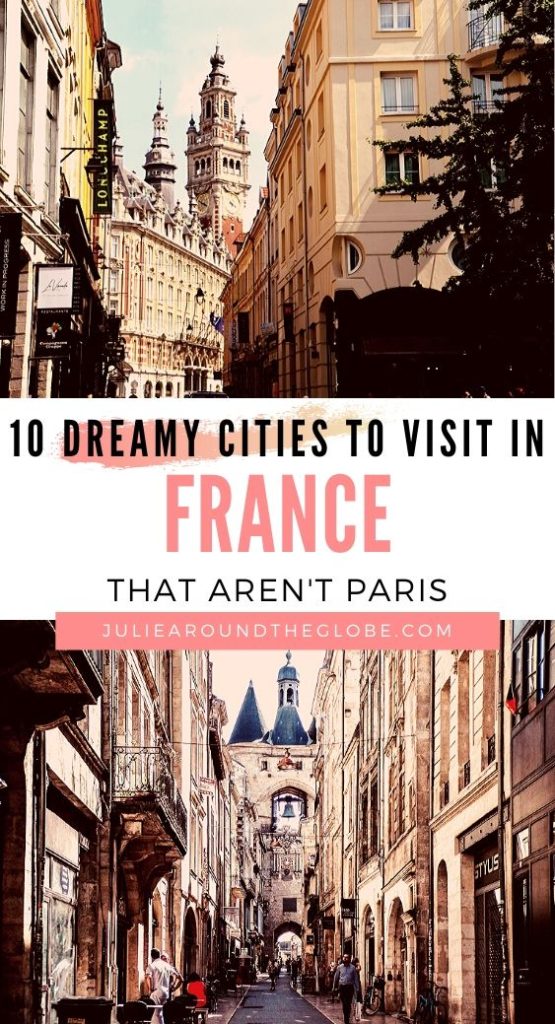 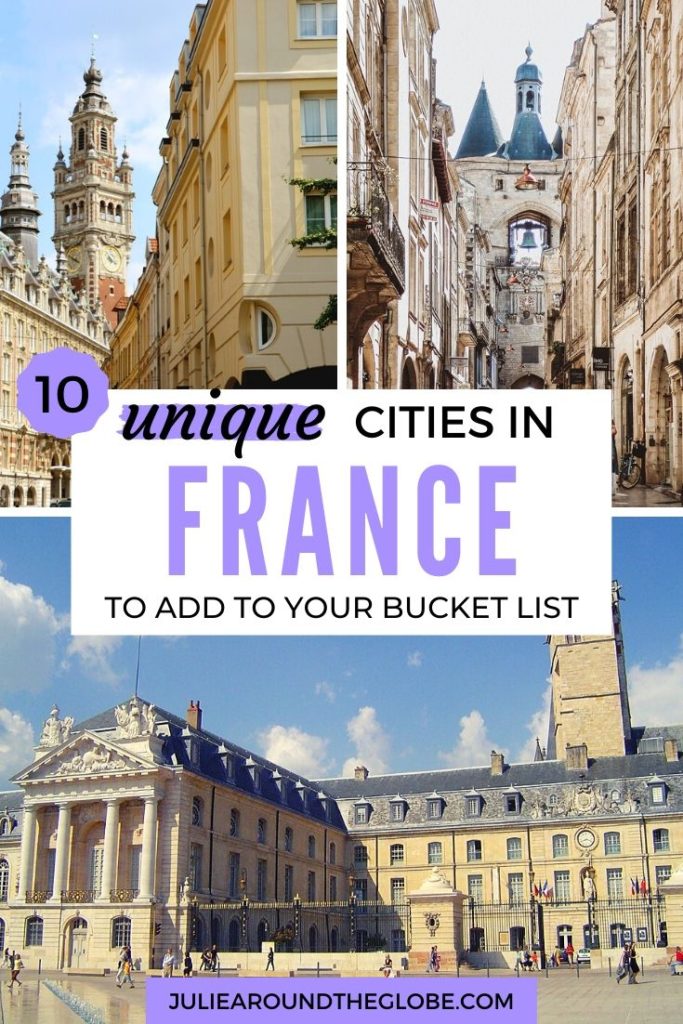 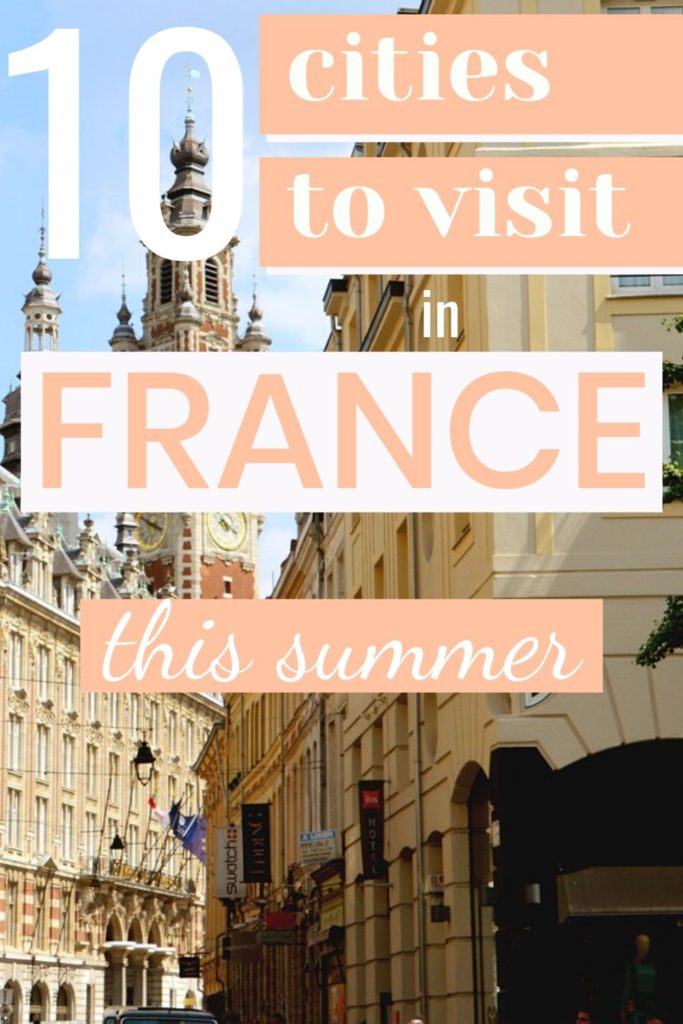 Useful travel resources to help you plan your trip: