Morelia historic center, a UNESCO World Heritage Site, is often overlooked by international tourists and they’re missing on something great. Morelia is a perfect city to spend a few days, visiting colonial houses and baroque churches, enjoying local gastronomy and learning more about Michoacan’s indigenous people in one of the city’s many museums. There are a lot of things to do in Morelia, read on to learn all about them and to discover the dishes you should try, where to stay and sample itineraries.

Best places to visit and things to do in Morelia 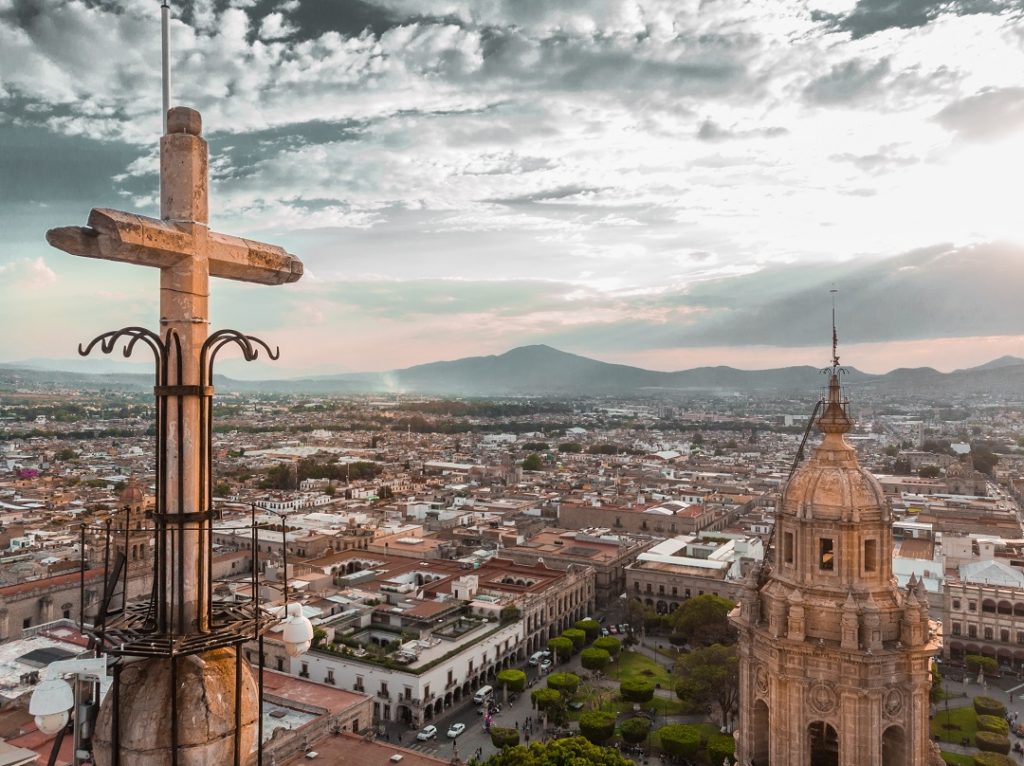 Plaza de Arma is Morelia’s main square and is at the heart of the historic center. Surrounded by baroque buildings, the plaza is worth a look.

Morelia Cathedral’s construction started in 1660 and took around 80 years to finish. Built with pink stones, the cathedral is a jewel of baroque architectural style.

A smaller baroque church, famous for its wooden altarpieces.

San Fransisco Church and Convent was founded in 1536 by the Franciscans. It’s one of the oldest buildings in Morelia. Inside, don’t miss the statue of the Virgin.

Shrine of our Lady of Guadalupe

Also known as San Diego Church, this shrine was built at the beginning of the 18th century. The outside is mostly baroque but the inside was remodeled in 1915 in a more Mexican style. The fusion of style is worth having a look at.

The hotel Virrey de Mendoza is one of Morelia’s architectural jewels. Now turned into a hotel, you can have a drink at the bar or a meal at the restaurant.

A callejón is a small pedestrian street. The Callejón del Romance is Morelia’s cutest street and a place full of legends and history of forbidden love.

The aqueduct is another emblematic edifice. It’s considered one of the most beautiful colonial construction in Mexico, as it’s almost in the same state as when it was built.

Other historic edifices you can visit:

A visit to Morelia wouldn’t be complete without visiting the house where Morelos grew up. Morelos is an important figure in Mexico’s independence. His childhood house has been turned into a museum in his honor.

In the evenings, it often turns into a cine club featuring old movies. The entrance is usually free.

Set in an ancient colonial house, the Michoacan Regional Museum will take you through the history of the state, from its indigenous people in pre-hispanic time to the viceregal period and the independence. It’s also one of the oldest public museums of Mexico, founded in 1886.

The museum is open from Tuesday to Sunday from 9 AM to 5 PM. The entrance fee is 60 pesos and is free on Sundays.

This cultural center, set in what used to be a religious school from the 17th century, offers permanent and temporary art exhibits. The building in itself is worth a visit. You can check out their website for a list of current exhibits.

The center is open from Tuesday to Sunday, from 10 AM to 6 PM. The entrance is free.

This cultural center, set in an ex-convent, offers different types of workshops, exhibits and cultural events. The convent was built at the end of the 16th century by the Carmelites. It has been remodeled to fit the cultural center but much of the original structure has been preserved.

Open every day from 8 AM to 8 PM (10 to 6 on Sundays). You can check their Facebook page for a list of current events.

The Museo de Arte Colonial features many documents and pieces of art from the Viceregal time. The building in itself is worth a look, a colonial house built in the 18th century using the Baroque architectural style. It was remodeled a century later to fit the neoclassical style.

Set in what used to be Morelia’s Courthouse, this museum features ancient law documents and temporary exhibits on a wide range of topics. The building in itself is  beautiful.

Michoacan is famous for its sweets, you’ll see a lot of shops selling different types of treats. Get a bit of everything to decide which one is your favorite. If you have space in your luggage, you could also get traditional clothes, representative of the state’s indigenous population.

Located in the historical center, this small market is a must-go if you have a sweet tooth or want to look at local handicrafts from Michoacan.

The Sweets Museum is actually a shop where they produce all the sweets they sell. They sometimes give tours of the kitchen so you witness the process for different types of traditional sweets.

You can easily visit the historic center on foot. A good itinerary would be to start at the Shrine of Our Lady of Guadalupe, from there you can see the aqueduct, Las Tarascas Fountain and the Callejon del Romance.

Then walk on the Fransico Madero Avenue, toward the cathedral. On your way, visit the Sweets Museum, and make a detour to see the San Fransisco Church, then the San Jose Church.

From there, go to the Casa de la Cultura then the Colonial Art Museum and the Santa Rosa Church. Next, head to Clavijero Cultural Center and the sweets market.

Then get back to the Fransico Madero Avenue and walk towards the Virrey de Mendoza Hotel, stroll around the Plaza de Arma, visit the cathedral then head to the Michoacan Regional Museum and the courthouse. Your last stop would be Morelos’ house.

You can do this in one day but you can also split it in two as it’s a lot to do in just one day.

You can also stop by the Tourism Office, they have maps and different itineraries.

If you’re not a big fan of walking or don’t have the time, you can take a bus tour. The departure point is on the Plaza de Arma, there are several operators, none in English unfortunately. They all offer the same route. It lasts around an hour and you’ll get to see all of the main sites.

If you speak Spanish and like spooky stories, you could take a night tour of Morelia’s historic center. Where the guide doubling as narrator will tell you everything about Morelia legends and ancient gossips. There are different operators, you can check the schedule at the tourist office.

I would advise spending at least two days in Morelia but one would be enough. Apart from visiting the historic center, you could take a day trip to visit the Monarch Sanctuary. The butterflies are there from November to March.

Morelia is easily reachable from Mexico City (a 4-hour drive). In Michoacan, you shouldn’t miss Pàtzcuaro and the others Pueblos Magicos surrounding it. You should also visit Queretaro City.

What to eat in Morelia

Morelia is famous for its Gaspacho. Don’t be surprised if it doesn’t look like cold tomato soup because it’s not. In Mexico, specifically in Morelia, gaspacho is a type of fruit salad. But not any type of fruit salad, the type that comes with chilies and cheese. I know it’s a bit weird but it’s a manageable weird. You should try it. If you can’t eat spicy food, you can ask for one without chilies. You’ll find the ones behind the Plaza de Armas on the Cerrada de San Agustin. 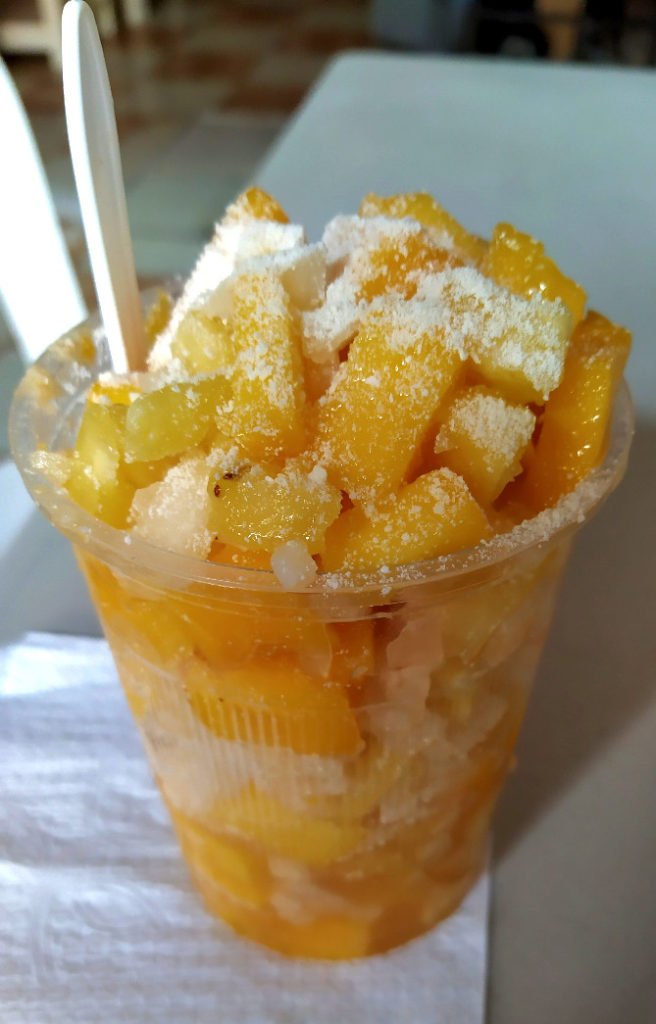 Nieve de pasta is a traditional ice cream flavor in Michoacan. I’m not sure what it’s made of exactly, as no one gave me the same answer. What’s sure is that it’s tasty and super sweet.

For the main course, you should try Uchepos and Corundas. Both are a type of tamales.

Where to stay in Morelia

Morelia historic center would be the best neighborhood to stay in, There you’ll find a lot of stunning luxurious boutique hotels set in old colonial buildings. You’ll also find a couple of budget and mid-range options. Here are some:

Like it? Save it for later – Best things to do in Morelia, Michoacan 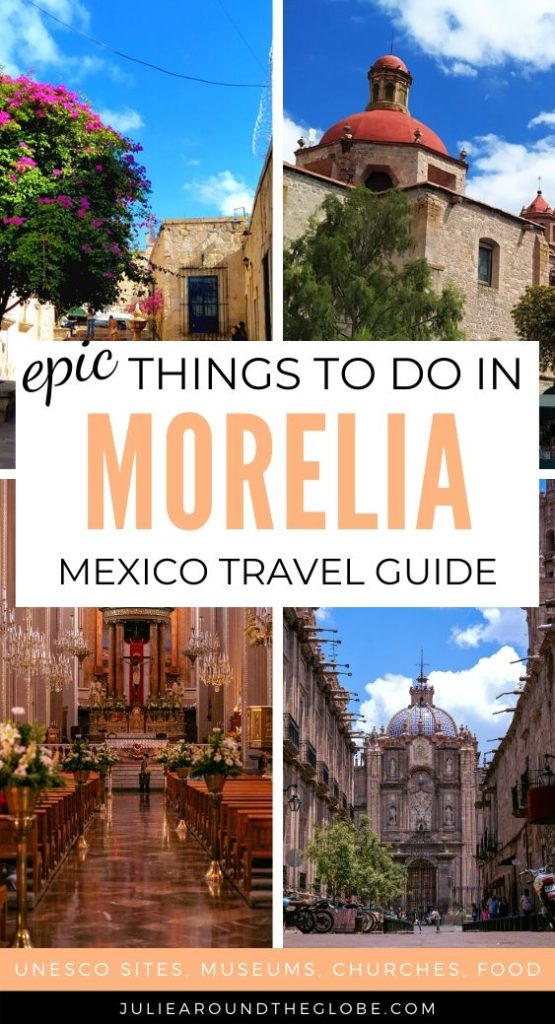 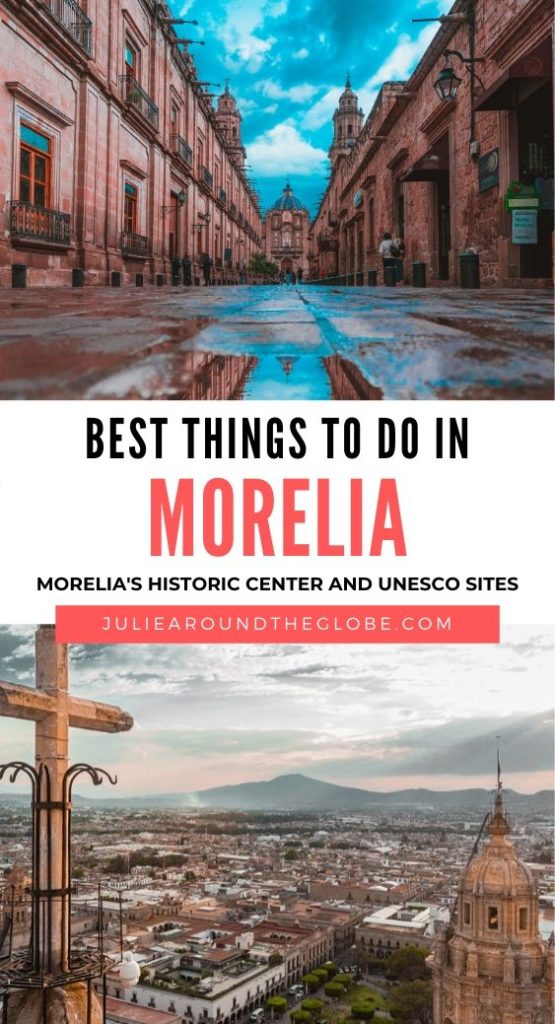 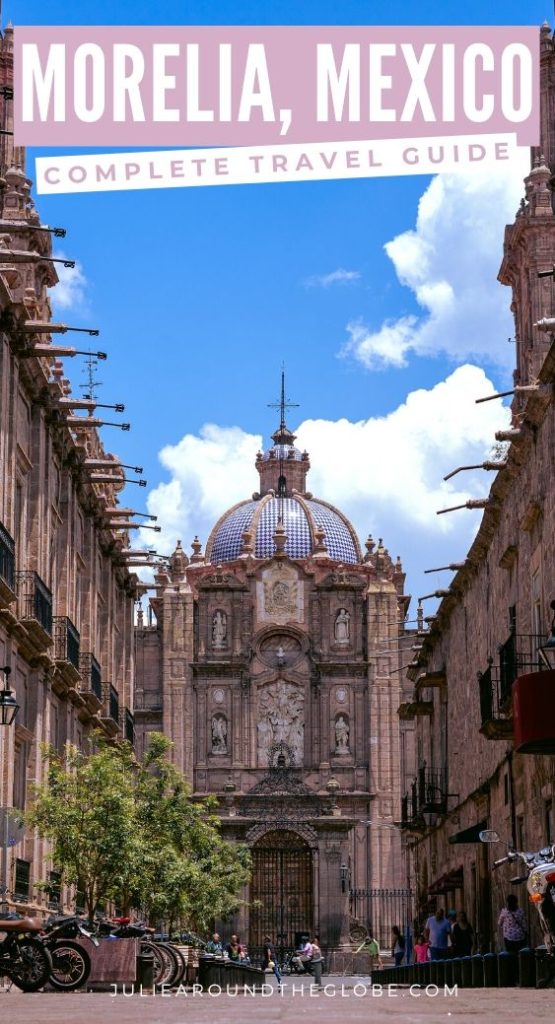 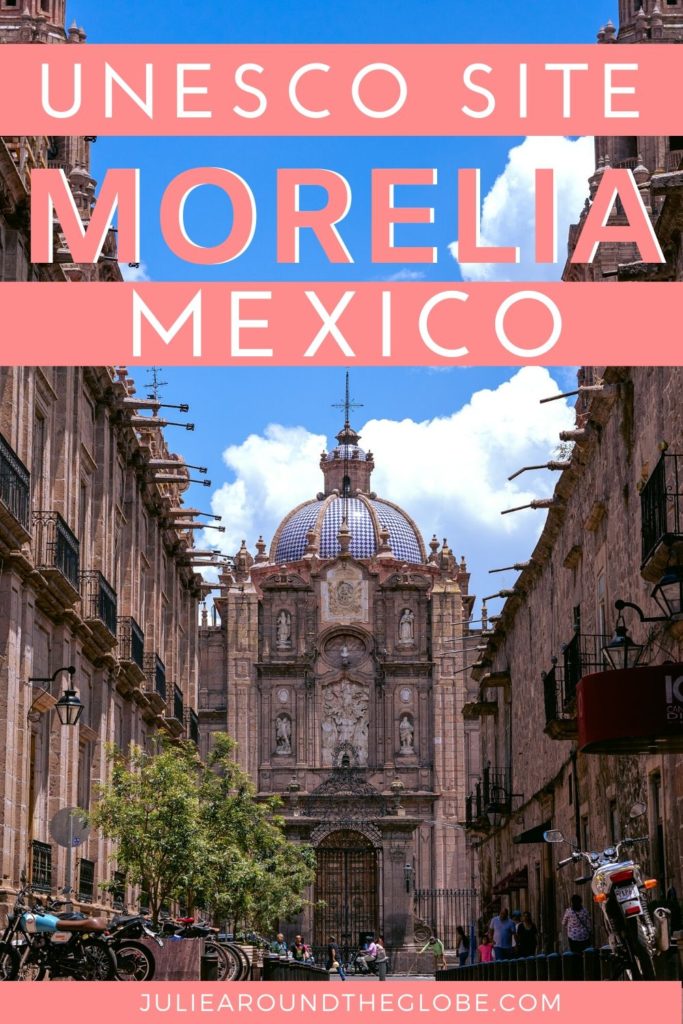 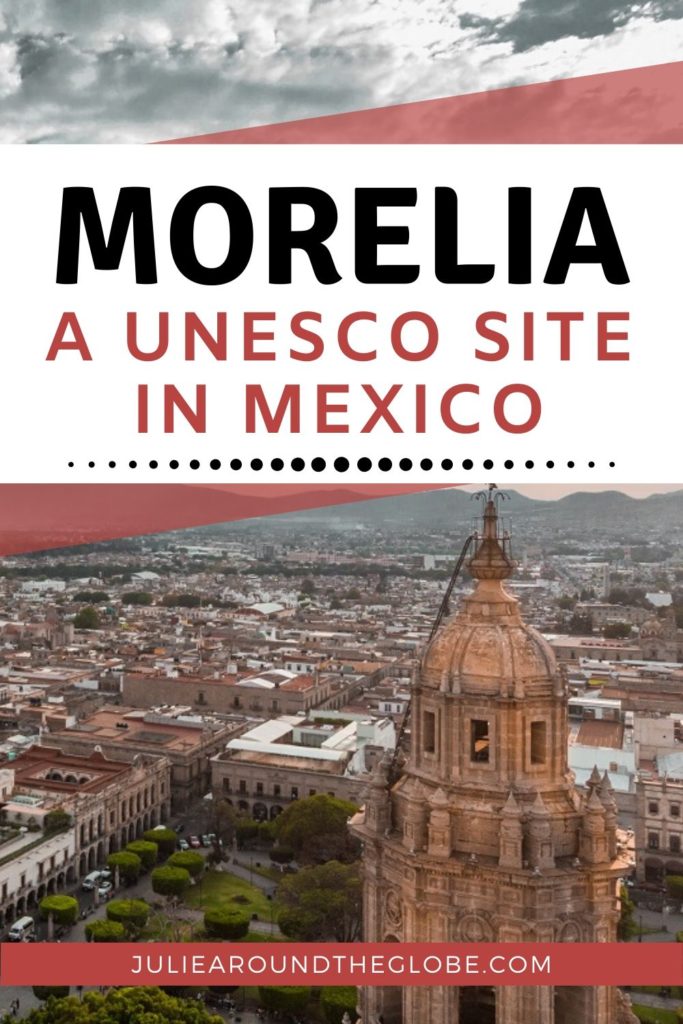 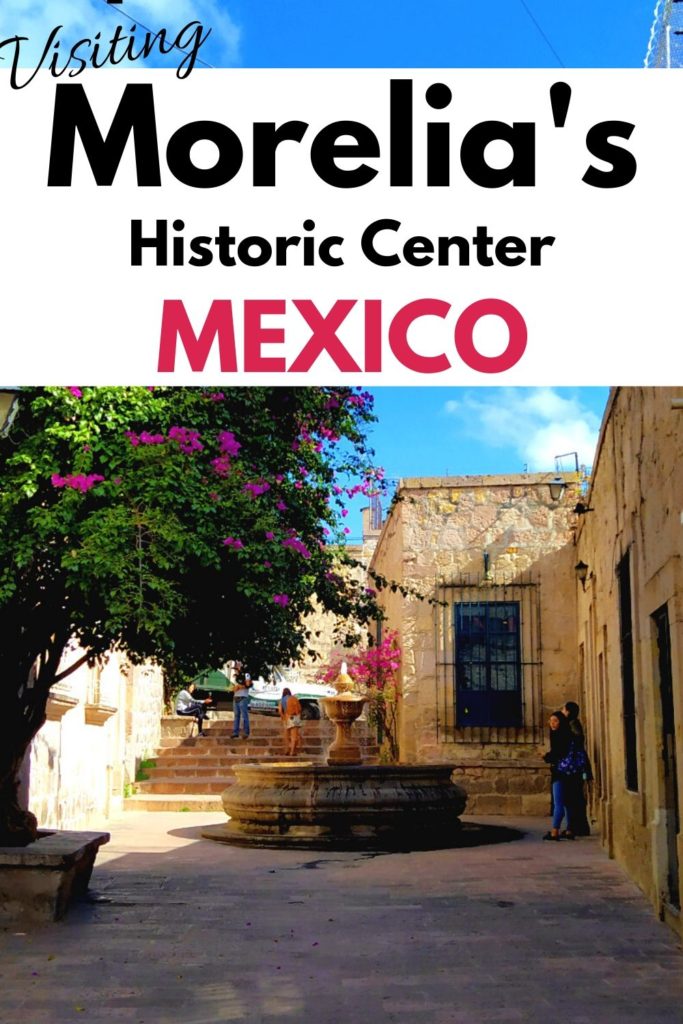 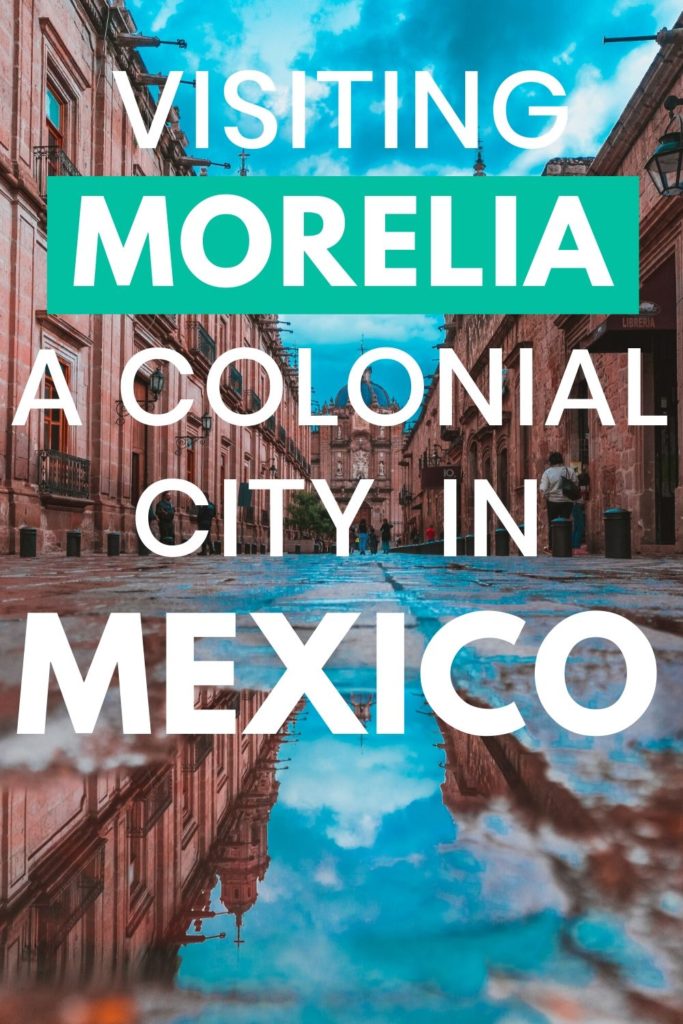