Patzcuaro is a vibrant Pueblo Magico (Magical Town) known for its Día de Muertos celebration. Every year thousands of tourists flock to the village to partake in this ancestral tradition (and party). Even the rest of the year Patzcuaro is worth visiting. Surrounded by mountains, archaeological sites, and other Pueblos Magicos, Patzcuaro is a beautiful and magical place.

Table of Contents show
1 Things to do in Patzcuaro
1.1 Stroll around the village
1.2 Learn more about the Purepecha at the Museum of Arts and Crafts
1.3 Visit the cemetery
1.4 Buy (or look at) some handicrafts
2 Things to do around Patzcuaro
2.1 Tzintzuntzan
2.1.1 Places to visit in Tzintzintzan
2.1.2 How to get to Tzintzuntzan
2.2 Ihuatzio Archaeological Site
2.3 Janitzio
2.4 Santa Clara del Cobre
2.5 Zirahuén
3 Patzcuaro Itinerary
4 Where to stay in Patzcuaro
5 What to eat in Patzcuaro
5.1 Let's stay in touch!

Things to do in Patzcuaro

Stroll around the village

From there, you can go to the Plaza Chica (Gertrudis Bocanegra Square) and visit the local market. On your way to the plaza, you can stop by the Hotel Posada La Basilica, one of the oldest ranch in Patzcuaro. Then head to the Plaza Vasco de Quiroga where you can stroll around, sample some local food and shop for handicrafts.

The Museum of Arts and Crafts is set in a 16th-century school and features ancient handicrafts from the Purepecha people. The exhibits will show you how indigenous people of the region live, and teach you about their crafts and traditions. The building is also worth a look.

The museum is open from Tuesday to Sunday, from 9 AM to 5 PM. The entrance fee is 55 pesos.

If you can’t make it to the Dia de Los Muertos, you can still pay a visit to the cemetery (Panteon Municipal). Its architecture is worth a look. Cemeteries in this area of Mexico tend to be a bit different and are usually full of flowers and art.

You can also visit the city’s second cemetery, the Panteon del Cristo. There, have a look at the Humilladero Chapel.

Buy (or look at) some handicrafts

Around the two plazas, you’ll find small stalls selling all types of regional handicrafts. You should also have a look at the Casa de Los Once Patios (The House of the Eleven Patios). The architecture of the house is beautiful, and in what used to be rooms, you’ll find small shops selling crafts.

Things to do around Patzcuaro

Places to visit in Tzintzintzan

Apart from having a funny name, Tzintzuntzan is a cute Pueblo Magico with many interesting things to see. First are the ruins of the former capital of the Tarascan State, up until the Spaniards arrived. In Purepecha language, Tzintzuntzan means “place of the hummingbirds”. The Purepecha arrived in the area in the 12th century and dominated most of the kingdom until the 16th century.

Tzintzuntzan’s population is estimated to have reached 30,000 people before the Spanish invasion. Today, only a small portion (the ceremonial center) of the prehispanic city remains. The ruins are unique, I haven’t seen this type of architecture in any other place yet, the pyramids (yácatas) are semi-circular and flat at the top.

The entrance fee is 60 pesos and the site is open every day from 9 AM to 6 PM.

Another interesting place to visit in Tzintzuntzan is the Monastery of San Fransisco. Located in the city center, this monastery from the 16th century is worth a visit. You’ll find several churches, small chapels, and the cloister. In the cloister, you can still see the original murals and wood carvings. In front of the monastery, you’ll find a handicraft market.

How to get to Tzintzuntzan

You can grab a combi in the city center in Patzcuaro or near the Monumento a Lazaro Cardenas on the Apatzingán-Patzcuaro road (you can also find shared taxis there). Get down at the monastery in Tzintzuntzan. The archaeological site is within walking distance but it goes uphill so you better take a cab if you don’t like walking.

Ihuatzio used to be a city part of the Purepecha Empire, but traces of older civilizations have also been found there. Ihuatzio, meaning “in the house of the coyote”, is a smaller site than the one in Tzintzuntzan as only seven of the 80 structures identified have been excavated. One of the site’s main features is the Huatziri, elevated paths to delimit spaces.

How to reach Ihuatzio: you can find combis to get to the village from Patzcuaro center (ask for the schedule as there are not that many going). Then walk to the site (less than a mile).

The entrance fee is 45 pesos and the site is open every day from 9 AM to 6 PM.

Janitzio is a postcard-famous island in Mexico. Located in the middle of the Patzcuaro Lake, this small hilly village has a lot of potentials but was unfortunately ruined by tourism. Arriving toward the island, you’ll see fishermen fishing the traditional way, don’t be surprised if they approach your boat to ask for money, all the fishes in the lake have been long gone, fishermen put on a show for the tourists’ benefits and to make a living.

Once you get to the village, you’ll instantly get called on to buy something all the way to the top of the hill. The main path you take to reach the top is an endless string of shops and restaurants. If you get out of the main path, you’ll see tons of trash and slum-like houses. I don’t understand why it’s so touristy.

However, the view from the top is beautiful, and you can take a nice-ish walk around the island, on the lake’s bank.

How to get to Janitzio: You can take a boat from the main dock (muelle general) in Patzcuaro. A round-trip ticket costs around 60 pesos. The ride takes around half an hour.

Santa Clara del Cobre is a small Pueblo Magico known for its copper handicrafts. The town is beautiful and full of shops and street stalls selling jewelry and furniture made of copper (I even saw a huge copper bathtub in one of the shops).

There you can walk around town, visit the Museo del Cobre and try the famous Torta de Tostada (a sandwich stuffed with a crispy tortilla).

How to get to Santa Clara del Cobre: There are frequent combis leaving from Patzcuaro city center.

Zirahuén is famous for its lake, there you can take a boat tour and explore some part of it. Apart from the main plaza and its church, there’s not much to do in the village. The boat tour is the main activity. Most of the accesses to the lake are private accesses, and there are no “beachy” areas in Zirahuén.

Several operators offer the boat tour, they all function the same way. The boat ride costs 60 pesos and lasts an hour. The boat will leave only when there are at least 15 people. The most frequented pier is the general one (Muelle General de Zirahuen).

The lake is beautiful, less polluted and wilder than Patzcuaro Lake. You’ll make a few stops along the way, one to a restaurant and one to an activity area. You can stay on the boat or get off and take the next one to get back.

How to get to Zirahuén: There are frequent combis leaving from Patzcuaro city center. Every two hours, there are combis to Santa Clara del Cobre.

I would recommend spending at least three days in Patzcuaro. You can take a day to explore the city and its museums. Another one to visit Tzintzuntzan and eventually Janitzio. And a third one to visit Zirahuen then Santa Clara del Cobre.

After visiting Patzcuaro, you can head to Morelia, Queretaro or Mexico City.

Where to stay in Patzcuaro

Patzcuaro is a small town, but it’s more convenient to stay in the historic center. Most of the hotels are outdated and not worth the price. If you’re on a budget, go for the cheapest one (check out Hotel Camelinas Area Blanca). If you want to treat yourself, check out La Siranda Casa Hotel, in my opinion, the only up-scale hotel worth its price.

If you’re planning to go there during the Day of the Deads, book well ahead.

What to eat in Patzcuaro

Patzcuaro is famous for its nieve de pasta, nieve is a type of ice cream you’ll find in most places in Mexico. The flavor typical of Patzcuaro is the pasta one. It has nothing to do with spaghetti, it’s more of a dulce de leche flavor. No one really knows what’s inside, everyone I asked answered differently. What I’m sure of is that’s it’s yummy and super sweet, start with the smaller serving size as it’s hard to finish.

Another typical dish is enchiladas. Each region of Mexico has its way to make it. One of my favorites is the ones from Patzcuaro. They stuff the tortilla with cheese and cook it in tomato sauce and if you want they’ll add a piece of roasted chicken on top. It’s served with cabbage and a delicious mix of potatoes and carrots. You’ll find the best one at La Pollita Feliz near the market on Plaza Chica. The servings are huge, you can order one for two.

Like it? Save it for later – Best things to do in Patzcuaro 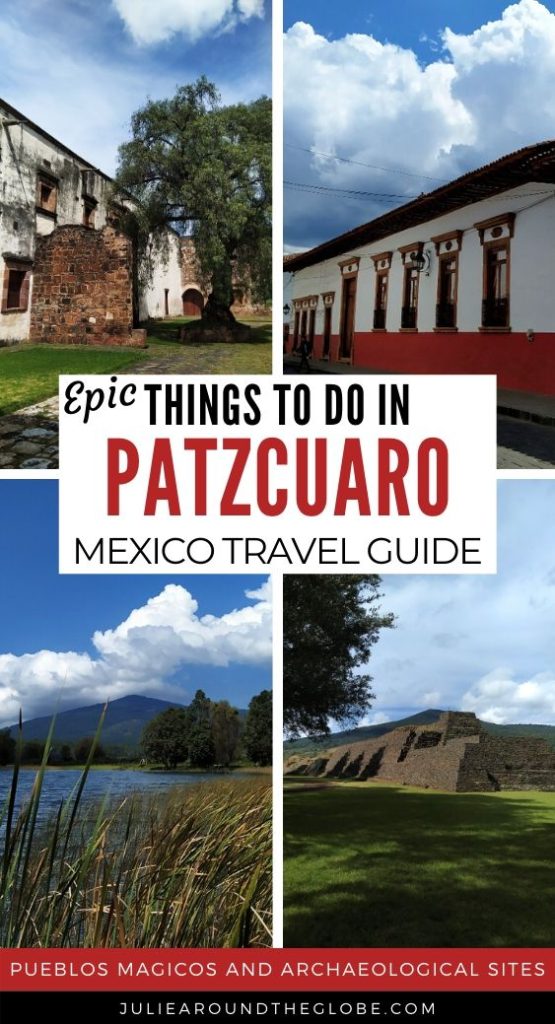 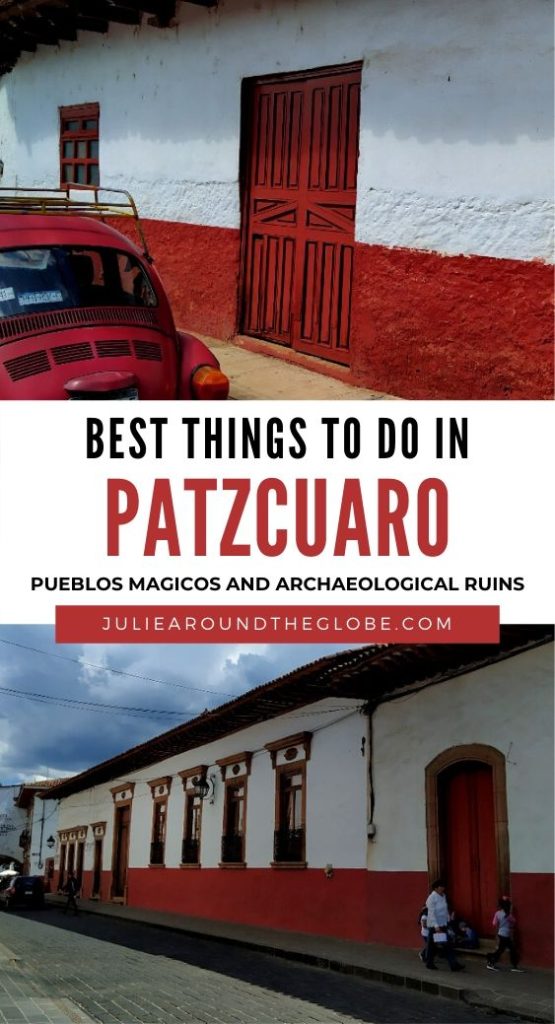 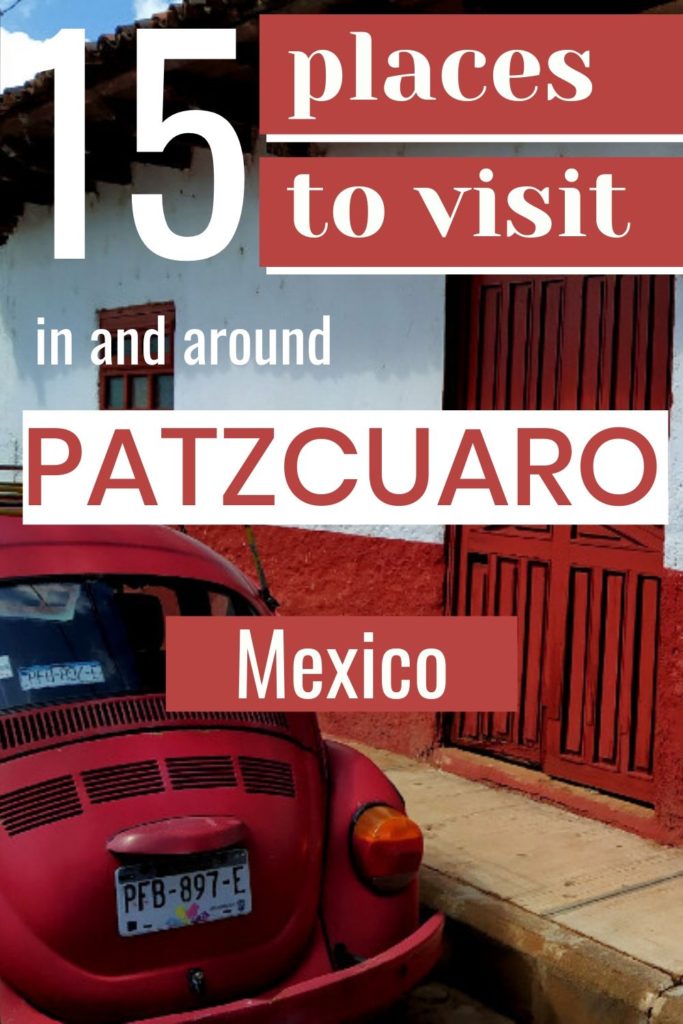 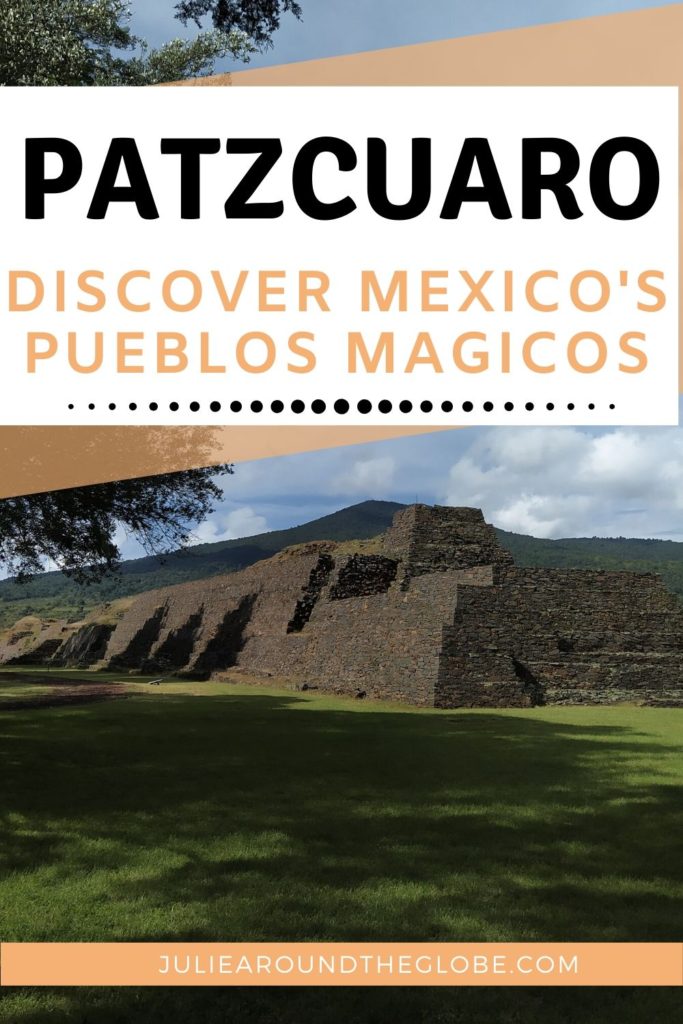 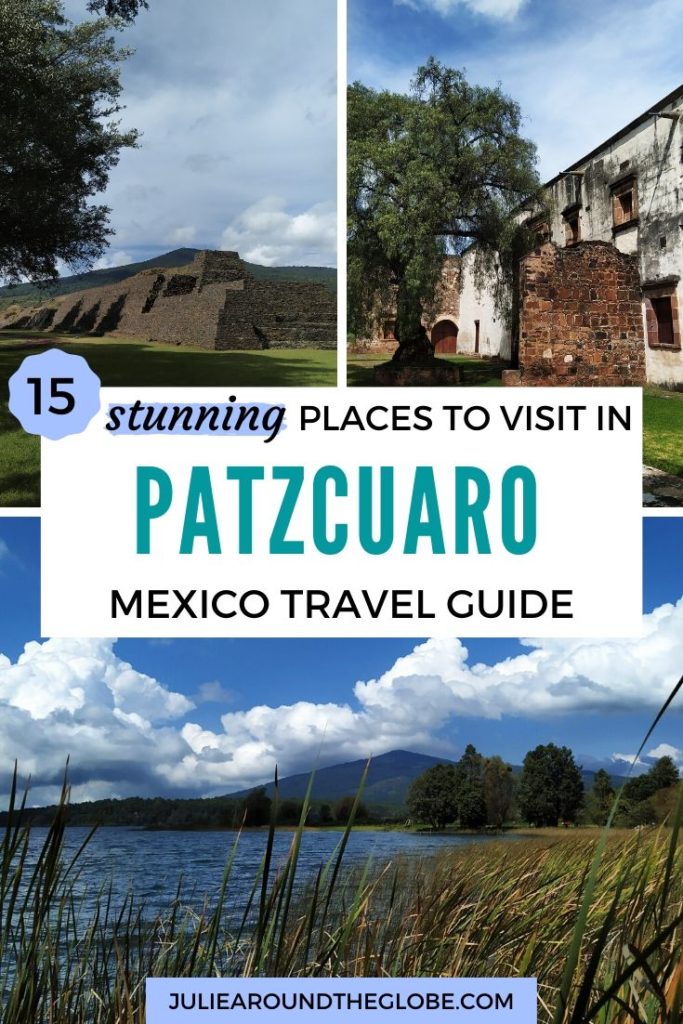