Out-of-the-beaten path, exploring the Roman ruins in Tunisia will awake the adventurer in you. Here, civilizations have mixed for centuries, creating a unique architectural landscape. At a crossroads between Africa, the Middle East, and Europe, Tunisia’s strategic location has made the country rich in history. From the Phoenicians up to the Arabs, the cities have evolved through time, bearing the marks of past civilizations.

Most of Tunisia’s historical cites’ splendor has been long gone. From their zenith to their ruin, ancient sites have been rediscovered all over Tunisia for the past few decades. The Romans have been significant contributors to what is left now, from public baths to amphitheaters and temples, ruins from the Roman Empire are scattered all over Tunisia.

Surrounded by olive trees and peaceful nature, the ancient city of Thugga is one of the most interesting African-Roman archaeological ruins. Its size, the monuments’ state of preservation and the landscape, make Dougga Tunisia’s most spectacular site and most visited Roman ruins.

Allied with Rome during the war with Carthage, Dougga is one of the few cities that did not get destroyed when Rome defeated Carthage. Contrary to most archaeological sites, the city never got abandoned. People were still living there, up until the 20th century when the archaeologists “chased” them.

Dougga is the perfect example of what a Roman city looked like during the Roman Empire Era. Guides are available at the main entrance for around 25 dinars. Almost all of the public buildings (theatre, baths, temples, market…) are still standing, as well as most houses, streets, and plazas.

Near Dougga, you can also visit the small town of Krib, which is North Africa’s oldest municipality. Then called Mustis, it used to be an important city on the Carthage – El Kef road during the Roman Era. Today, only a few ruins remain, you’ll be able to see the paved street, the buildings’ foundations, a couple of temples, and a later added Basilica.

Open every day from 9 am to 7 pm, no entrance fee.

Both towns used to be Roman cities, and you’ll find there some ruins scattered here and there. Like in many other sites, the archeological work has been stopped, and a considerable part of both sites is still underground. There is not much information on them, and you’ll have to look around to find the ruins as they are not all in the same area. Maybe not worth visiting if you don’t have much time and no guide with you.

Bulla Regia, a quiet little town between Tunis and the Algerian border, hides many treasures. This city is more than 2000 years old, and in its heart, you’ll find an incredibly well preserved archaeological site. The site is famous for its mosaics and its unique type of underground houses which you won’t see anywhere else in the world.

To learn more about Bulla Regia, check out this post.

Hammam Mallegue is probably one of the oldest thermal baths in the world. Built by the Roman around the 1ft century AD, the pools are still in use today. Famous for its Iridium layer, this natural hot spring is great to help cure obesity and musculoskeletal disorders.

The original structure is incredibly well preserved, located in the middle of nowhere, 15 km from El Kef, the place is super relaxing.

Haïdra, then known as Ammaedara, is believed to be Africa’s oldest Roman city. There, you’ll find Tunisia’s biggest Byzantine fortress, a couple of buildings pretty well preserved, a church, an underground bath and mausoleums shaped like towers. Haïdra is also famous for its triumphal arch, built in 195 AD and still incredibly well preserved.

Warning: Haïdra is located in Kasserine State, which is not a super safe area, especially in the mountains near the border. It has a terrible reputation among Tunisians. Unless you’re a large group, I wouldn’t recommend going there without a local to accompany you. Before planning a visit to Kasserine State, always check the situation beforehand. This being said, talking with locals, I believe the worst that could happen there is getting robbed.

One more off-the-beaten-path archeological site, Makthar (or Maktar) was built in the 3rd century BC by the Numids. It later became a refuge for the Punics after the fall of Carthage in 146 BC. Not long after, it became part of the Roman Empire.

The site is one of the largest in Tunisia, the ruins are scattered in a large area, and a lot of excavation work remains to be done. There’s a small museum there where you’ll be able to get some information on where to find the most important ruins.

On the main site, notice the Roman road with its paving almost intact, leading to a spectacular triumphal arch. The highlight of Makthar definitively is the southern baths, the best-preserved you’ll see in all North Africa. Also, some of the mosaics have been left on the site and are magnificent.

Sbeïtla is a beautiful archaeological site and probably the most intact one you’ll find in the country. Founded in the 1ft century AD by the Romans, Sbeïtla, then known as Sufetula, was prosperous between the 2nd and the 4th century AD, only to be destroyed by the Arabs during the 7th century.

The site is pretty well organized, with a museum, a map of the ruins and educational panels for most buildings. You also can hire a guide near the entrance. Sbeïtla is one of Tunisia’s most well preserved Roman ruins.

Sbeïtla is famous for its theater, the oldest building found there and its three temples dedicated to Jupiter, Juno, and Minerva. The site is vast and full of treasures, some of the houses are really well preserved, and you’ll be able to identify the public bath, the market and several churches built later on.

Sbeïtla is located in the same state as Haïdra, Kasserine State, which is known to be unsafe. Unaccompanied women should probably avoid going there. The site is supposed to be safe though. During the high season, there are a lot of tourist buses going there. Just try not to spend the night and don’t go into Kasserine city.

Located in the middle of nowhere, the ancient city of Limisa remains mostly unheard of. Not much archaeological work has been done on-site, only the Byzantine fortress and the theater are known and can be freely visited.

A bit hard to access, it’s only worth visiting if you have a lot of time or if you’re passionate about archaeology.

Thuburbo Majus, surrounded by nature and peace, is another beautiful Tunisian archaeological site. Smaller than Dougga or Bulla Regia, archaeologists have only uncovered a sixth of this 5th century BC city. Partly destroyed by the Vandals, then later abandoned, only to be rediscovered in 1857. Most of the artworks have been transferred to museums, but some of the buildings are still standing today. The ruins, appearing here and there, are scattered in the countryside, and are surrounded by nature.

It was from the ancient city of Ziqua, now Zaghouan, that the aqueduct bringing water to Carthage started. Build in the 2nd century AD, it’s still standing today.

Zaghouan is a cute little town reflecting its history. The area is also great for trekkings; you can walk to the Temple des Eaux (Water Temple), built in 130 AD.

El Jem is famous all over Tunisia for its spectacular amphitheater, a UNESCO world heritage site. It’s the third-largest amphitheater left in the world after the one in Rome and the one in Capoue, and it’s also Tunisia’s most significant Roman ruin. Built at the beginning of the third century, it’s a must-see if you’re in the country.

Carthage used to be a vast empire, unfortunately, its leader, Hannibal, after conquering most of the Mediterranean basin, got defeated by Rome. Romans then partly destroyed the city and started occupying it. Today, you can see several ruins, scattered around Carthage, especially the Antonine Baths, the theater and a couple of Roman villas.

To know more about Carthage, check out this article.

Thinking of traveling to Tunisia? Check out my other articles and travel guides.

Like it? Save it for later – Roman Ruins in Tunisia – Travel Guide: 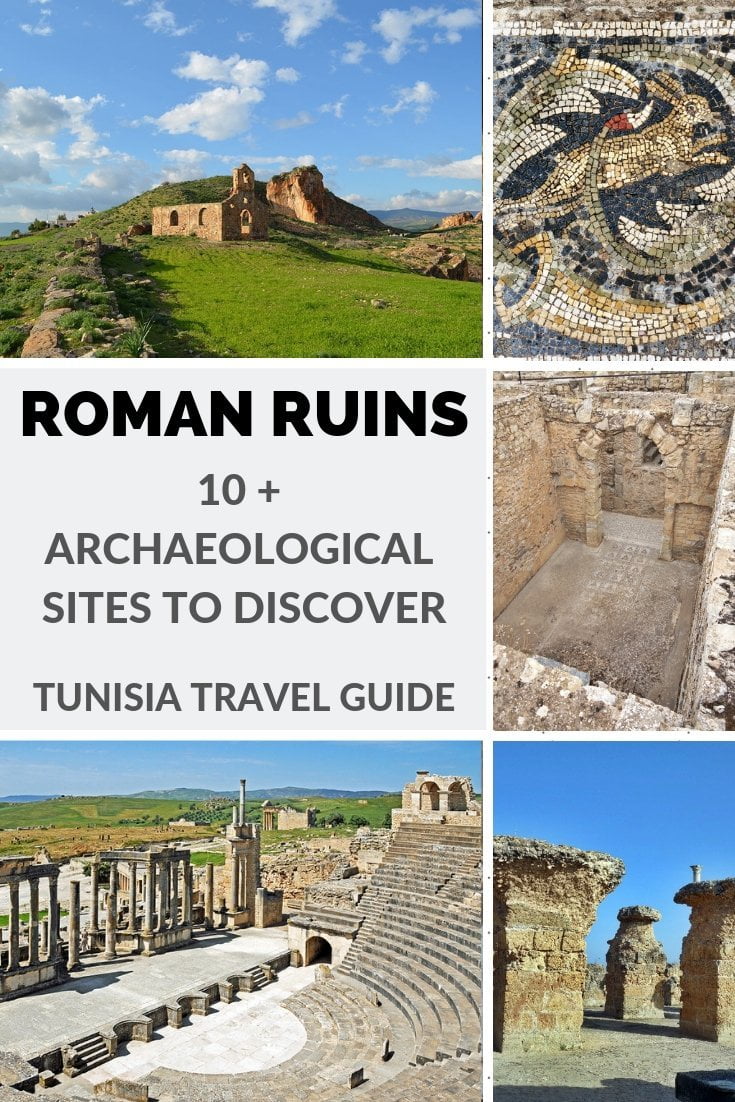