My Son, located about 50km inland from Hoi An, is a must-see if you are interested in architecture and ancient civilization. My Son was considered a holy land by the Cham civilization. This UNESCO World Heritage site is a magical place where the time seems to have stopped.

Most of it has been destroyed during the war with the Americans, but some ruins remain. A couple of buildings are still in good shape, the carvings are really well preserved, and some of the sculptures are quite impressive. It’s a good opportunity to learn more about Hinduism rituals and the history of the Champa kingdom and its people. The Champa kingdom was located in central and south Vietnam and lasted from the 2nd century to the 15th century until the Viet conquered it in 1471. The Cham were traders, fishermen, and farmers. The art and way of life were strongly influenced by Indian culture. A system of casts was implemented and the king, though to be a reincarnation of Shiva, was all-powerful.

Some of the Cham converted to Islam during the 17th century, making it one of the only Muslim ethnic group in Vietnam (most of them remained Hindu). Since the dissolution of the Kingdom 500 years ago, they had been persecuted and forced to give up their customs. In Cambodia, they have been targeted by the Khmers Rouges during the purge, and in Vietnam, they have been pressured into the assimilation of Vietnamese culture.

Things are better today, the Cham are now mostly located in Phan Thiet and in Phan Rang, some also are found in Cambodia. Overall, they preserved a strong cultural identity through holidays and rituals. They still live in traditional bamboo houses, usually in very basic conditions. The caste system is still implemented, and they have a strong sense of one’s duty and place within their society. They still mostly live from farming, education is highly prized though.

Traditional music and dances are also an essential part of community life. In My Son, you may have the opportunity to watch a traditional dance show (every day at 9:30 am, 10:30 am, and 2:30 pm).

About My Son – Holy Land

Build in the 4th century by the Cham Emperor Bhadravarman, My Son (pronounced me son) used to be a holy land surrounded by jungle and sacred mountains. The first temple was made of wood, as all the Cham building at the time. It got destroyed by fire two centuries later and was replaced by a red-brick temple. After this, each king would restore and add temples during their reign to commemorate victories or conquest, making it grow along the centuries. It also served as a burial place for several kings. This holy land quickly became a religious and political center of influence over the whole kingdom, until it became the capital of the Champa Kingdom. Chose for its strategical and protected position, it’s one of the principal remains of the Cham civilization, and the inscriptions found there helped get a better understanding of Champa history.

Most of the temples were dedicated to the Hindu God Shiva, who is believed to have founded the Champa kingdom. As the Cham became Buddhist during the 9th century,  Buddhist influence is noticeable over some of the carvings and sculptures. The 10th century shows a regain of Hinduism faith and marks an intensive expansion period for My Son. Unfortunately, wars with the neighboring countries in the 11th century destroyed a good part of the site. It was restored to some extent, some temples were added, and rich presents were offered by the kings. No information is available after the 13th century, no documentation regarding offerings or construction work was found.

Rediscovered and restored in the 19th century, the ruins had been divided into 8 groups scattered along the way.

Because it has been build through 9 centuries, different types of architecture are noticeable as the evolution of Cham art evolved over the years. All the buildings are made of red brick, typical of the Cham construction style, and Indian influence is present. Each group had a main temple and was surrounded by smaller structures. Each temple had a different purpose and was dedicated to a different god. The main door of the main temples faces East (towards the gods), next to it is often a room dedicated to welcome the pilgrims, receive their offering, and perform the ritual dances.

The carvings represent mostly animals, plants, and magical beings. Each has a signification for the Hindus, for example, elephants are a symbol of longevity and the lotus flower of beauty, prosperity, and fertility. The carvings in Hindu and Buddhist temples also usually tend to depict a traditional story.

The sculptures represent gods and spirits/supernatural beings. Some of the tools used for the ceremonies are being kept around the site or inside some of the temples.

Even if most of it is in ruin, you will still get a good sense of what it looked like at its peak. Restauration work is still going on.

How to get there – My Son Holy Land

There is no public bus to the site, you can either rent a motorbike for the day (recommended) or book a day tour from Hoi An with one of the many travel agencies. The road is pretty nice, with many paddy fields and mountains in the background. Of course, you can also hire a driver for the day.

Try to avoid the warmest hour, the ruins are in the middle of the jungle, and it’s super humid.

The entrance ticket is 150k dongs, the place is open from 7 am to 5 pm every day.

If you come by your own means, you still have the opportunity to hire a guide at the entrance. If you chose the tour with an agency, the guide would be included.

Related articles to help you plan your trip to Vietnam: 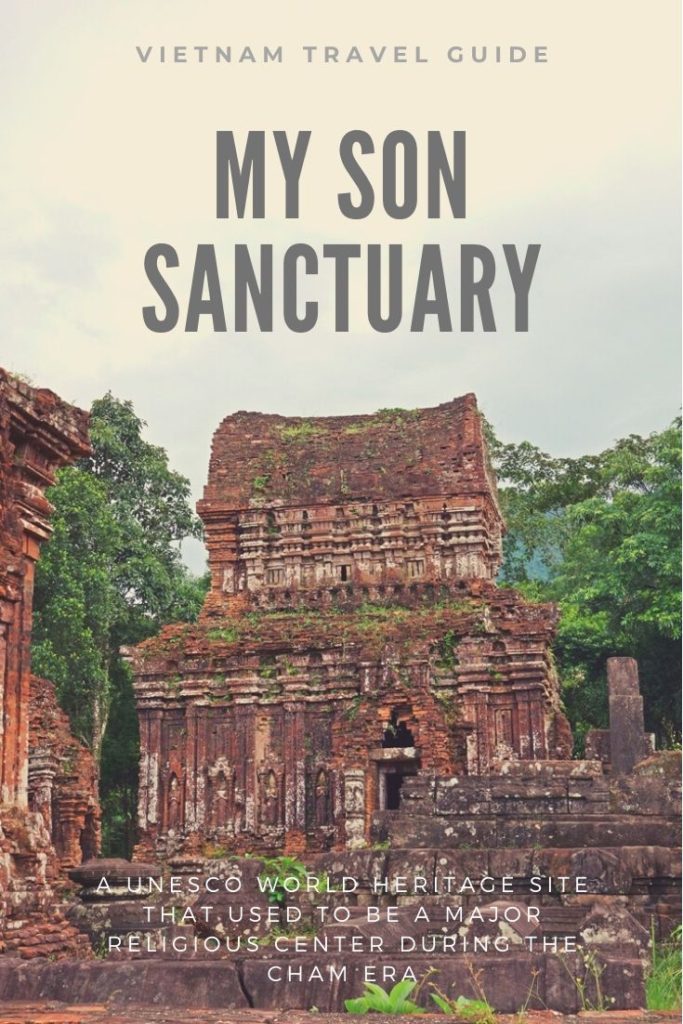