The Cap Bon, off of Tunisia’s East coast is a popular beach destination among locals. Even during wintertime, the coast is worth visiting, with impressive views, white-sanded beaches, and interesting local culture. Driving along the Cap Bon is the perfect road trip, you can explore everything in one day, or take more time if you want to enjoy the beaches. You can also go by public transportation, but you’ll need at least two days to go all the way around. There are several interesting places to discover, here is a list of the must-go places in the Cap Bon.

Korbous is an ancient city famous for its seven hot springs their temperatures going from 40 to 60 degrees Celsius  (100 to 140 degrees Fahrenheit). The most famous one is the Aïn-Atrous hot spring, locals usually go there as part of a cure, the water is supposed to have strong healing properties.  There are also several treks you can do around Korbous along the cliffs on the old Soliman road, now closed to motorized vehicles.

The Araka Hammam is also worth a go, it actually is a cave where the warm water naturally comes out of the wall. There’s a warm pool where you can bath. They also offer a special type of drink made from local herbs that make your sweat smell funny. The hammam is open around the clock, check the time for men and women beforehand.

The Punic Caves of El Haouaria El Haouaria is home to several caves used during the Punic period, the intricate cave system cannot be fully visited but you can still observe traces of the Punic civilization. The area used to be a rock carrier. The place is famous among locals because one of the rock has the shape of a camel. The cave also served more recently as a hiding spot for soldiers during previous wars.

The view there is magnificent, there’s no beach but the water is super clear and you can just access the sea through the rocks. There’s also a nice restaurant just next to the sea serving fresh fishes and traditional Tunisian cuisine.

El Haouaria is also famous for its falcons, locals would usually capture and teach them to hunt, then let them go after a couple of months.

These two islands are part of a protected area and not many people live there so most of it is really wild. You can organize a boat trip there. There’s no public transportation so you can either rent a private boat for the day or go through an organized tour, but it’s not frequent and usually only during summer. The islands are famous for bird watching especially during the migratory season. It’s also an important archaeological area as many Punic, Roman, Vandal, Byzantine, and Arab traces have been found there as well as several human-remains dating back to 3 000 to 4 000 years BC.

Kerkouane is a UNESCO World Heritage Site and is the ruins of a Punic city from the 6th century BC. Literally located in the middle of nowhere, the site has been protected from development and left untouched for centuries. It’s a really nice place but don’t expect something spectacular, there are no buildings left only the foundations. You can still see clearly the streets and how the houses were organized, you can also see bathtubs and mosaics in some places.

Don’t miss the museum and its wooden sarcophagus from the third century BC, it is believed to be the final resting place of a goddess. There’s no public transportation to Kerkouane, you can either take a shared taxi along the Kelibia/El Haouaria road and asked to be dropped off at the intersection, from there it’s a 2 km walk or you can try to hire a private cab to take you there and wait for you. It should be around 10 dinars. The thing is, there’s a lack of transportation in this area so during peak time you probably won’t find a private cab for 10 dinars and you’ll have to pay more, but if you go during a quiet time it should be ok. Ask your hotel to help you. Make sure to agree on the price and waiting time first. You’ll need at least an hour to explore the site.

Kelibia is a famous beach destination among locals, even during wintertime, it’s a pleasant city. If you want to find a quiet place at the beach just walk a bit farther and you’ll usually find some alone spot. In Kelibia you can also visit the Byzantine Fortress, built in the 6th century, you’ll find different architectural styles left by each civilization. First the Zirides, then from the Ottomans, you’ll also see some Spanish influences and even an English canon from WW2. The view from the guards’ way is impressive, looking over the cliffs and the sea.

You can also visit nearby Mansoura beach, wilder and pretty big, the sand is thin and the water really clean.

If you’re on a budget you can stay at the youth hostel (Maison des Jeunes de Kelibia) for 10 dinars per night, call to check availability (72 296 105).

On the road from Kelibia to Nabeul don’t miss the hordes of flamingos, the best time to see them is during the migratory season in March and April, but you can still see some until late summer/autumn. Nabeul is another important beach destination in Tunisia and is famous for its potteries, its mats usually found in mosques all over the country, and its flower waters (orange, rose and jasmine). The city is also rich in history, founded by the Phoenicians in the 5th century BC, Nabeul was destroyed during the Third Punic War in 148 BC by the Romans. It got rebuilt a century later, thanks to its allegiance to Cesar. To see some remnants of the Roman era, head for the Neapolis site (DT 7), you’ll find some ruins of fish drying factories, pools used to make Garum, a Roman delicacy at the time, and several houses ornamented with mosaics.

In Nabeul you can also visit the Archaeology Museum (DT 7, closed on Mondays), you’ll found artifacts from the Cap Bon, statues from the Roman and Punic eras, and some incredibly well-preserved mosaics.

For shopping visit the traditional souk, the best time is during the morning or on Fridays. Avoid the Camel market, it’s a tourist trap. For potteries, you can visit the workshops located north of the road going to Tunis. It’s more expensive than in the Souk but the quality is better and the designs more creative. The Quartier des Nattiers is also worth a look, in this neighborhood locals craft mats and several objects used for daily life. The Nabeul Mosque can also be visited (think of being appropriately dressed and bring something to cover your hair). The mosque architecture is really beautiful, don’t miss the main door and its thinly carved framing.

Hammamet is home to the biggest nightclub in Africa, L’Oasis, it’s also really touristy and gets really busy during summer. It’s a good place to enjoy the beach and everything ostentatious. Apart from the beach, the medina is worth a look, be careful of locals wanting to tour you around, they usually work with a shop and will try to take you there and make you buy stuff. Surrounded by high walls, the medina is a nice place for a stroll, you can also visit the 9th-century fort and the Dar Khadija Museum. If you like ruins you can go to nearby Pupput, the archaeological site of an ancient Roman city.

Diving is also possible in Hammamet, several diving clubs can be found near the beach. Most of them are not affiliated with PADI, but with the CMAS (also really safe and serious).

How to organize your trip to the Cap Bon

The best way to explore the Cap Bon is by renting a car, always use the “known” car rental companies and not the small independent businesses, always take pictures of the car before leaving with it. The roads are pretty good, just be careful of the crazy way Tunisians drive (do not drive slow). You can organize a day trip from Tunis or Hammamet. You can also take a couple of days if you want to go trekking or enjoy the beach. You’ll have no problems finding accommodations along the way. During high season and if you’re on a budget, book the hotel in advance.

You can also go by public transportation, but not in one day. There are buses and louages (mini-buses) going from Hammamet to Kelibia and from Korbous to El Haouaria, and also shared taxis from Kelibia to El Haouaria. Be careful, all public transportation usually stop running around 5 PM. You can also take a tour, but I really recommend renting a car for the best experience.

Related articles to help you plan your trip to Tunisia: 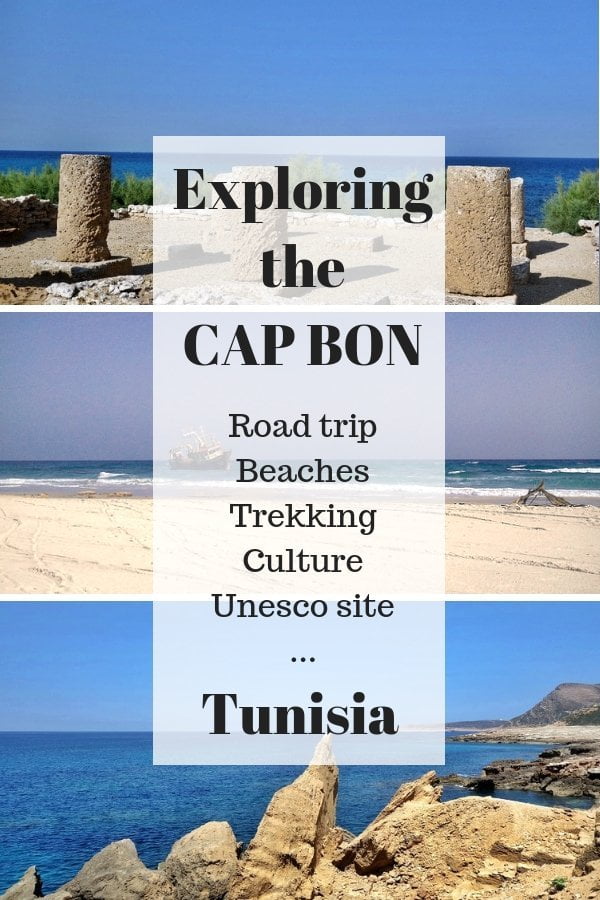 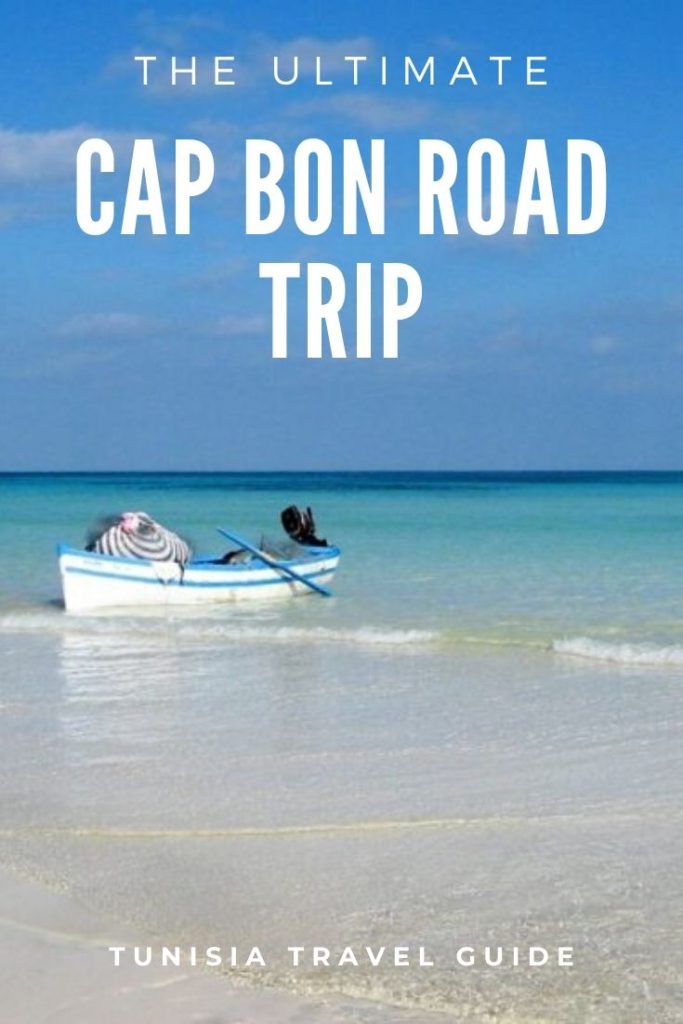