Kandy is one of Sri Lanka’s main city, located in the central area, the town is part of the cultural triangle with Anuradhapura, and Polonnaruwa. The city was first known as Senkadagalapura, then as Mahanuwara, and when the Portuguese invaded, they named it Kande, after the local chief Kande Raja, or King of the Mountain. Nowadays, the city is mostly called Kandy, but some locals from the area call it Udarata. Read on to discover what to do in Kandy.

Kandy was founded around the middle of the 15th century and became the capital of the Sinhalese empire in 1592 until the 19th century. The city kept its independence from the Portuguese, then from the Dutch, to finally lose the battle in 1815 and surrender to the British invaders. The city is now the religious capital of Sri Lanka and is an important place of pilgrimage for Buddhists, especially the Sri Dalada Maligawa, or Tooth Temple, famous for its Buddha relic.

Every summer, in August, the tooth is walked around the city, by the eldest elephant of the procession, during the Perahera festival. The celebration lasts 10 days, and many Sri Lankans and tourists come to witness this holy ceremony. During the full moon, or Poya, about a hundred elephants march all together around the city.

What to do in Kandy:

The Tooth Temple is Kandy’s most famous attraction. Built in 1595, it has been destroyed many times but has always been rebuilt. Three times a day, the monks held a ceremony (at dawn, noon and in the evening), washing the relic, believed to be one of Buddha’s teeth, and giving the water to the people present at the ceremony. The water is believed to have healing properties.

The relic had an essential place in Sinhalese history because the one who possessed it was the one holding power. The relic arrived from India in the 4th century and was transported to Ceylon, unofficially, by Princess Hemamali and her husband, Prince Dantha, following her father’s order, King Guhasiva.

From then on, the Sinhalese King was in charge of protecting the tooth, and many temples have been built to receive it over the centuries, depending on where the capital was at the time.

The current building dates back to the 18th century, but many modifications have been made, next to it are the imperial palace and the queen bath. There are also a lot of other smaller temples attached to it, so just stroll around and explore all the areas.

The Tooth Temple is open every day from 5.30 AM to 8 PM. The entrance fee is RS 1000 for foreigners. Don’t forget to dress appropriately. 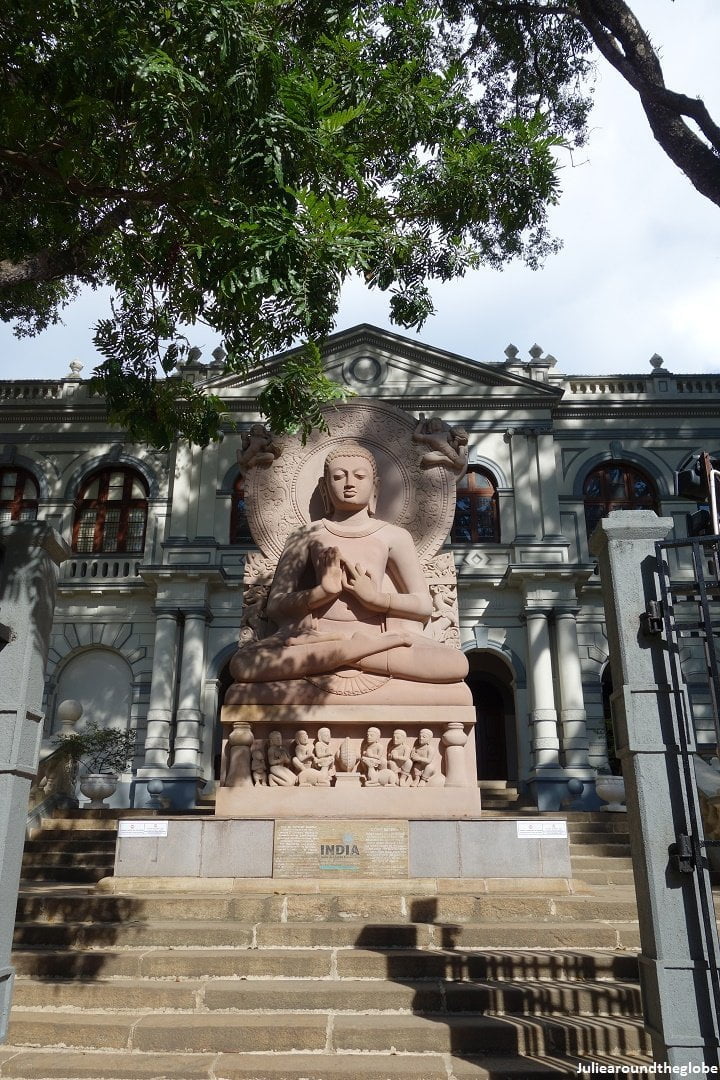 The palace close to the Tooth Temple has been turned into a museum. Apart from the stunning architecture of the building, this museum is interesting because it shows how different countries practice Buddhism around the world.

The Sri Lankan government invited all the Buddhist countries to participate in the exhibit. Each room represents a country where their practices are explained and their temples and sculptures are represented. Some rooms are bigger and better furnished than others, depending on the country’s involvement in the project.

It’s an opportunity to learn more about Buddhism and how different cultures celebrate it.

The World Buddhist Museum is open every day from 8 AM to 7 PM. The entrance fee is included in the Tooth Relic Temple entrance fee. Count around 1.5 hours to visit it. 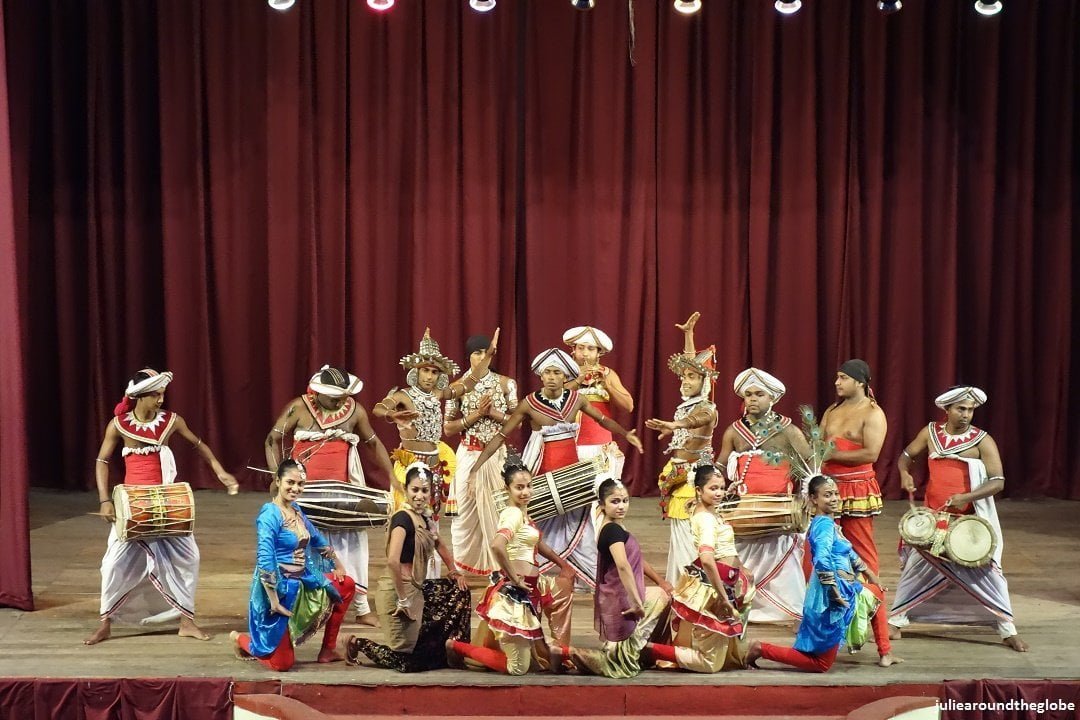 The dance show was the activity I liked the most in Kandy. The costumes are impressive, and behind each dance, there’s a story and a reason why they’re dancing. It’s a must-do if you’re in Kandy.

Many places offer traditional dance show, I went to the one offered by the Kandyan Art Association and Cultural Centre, near the tooth temple. They also sell handicrafts, and sometimes the craftsmen are there to demonstrate how they make their products.

The shows are usually around 5-6 pm, try to book your ticket in advance so you can choose your seat. A ticket cost Rs. 500.

4 – Take a walk around the lake 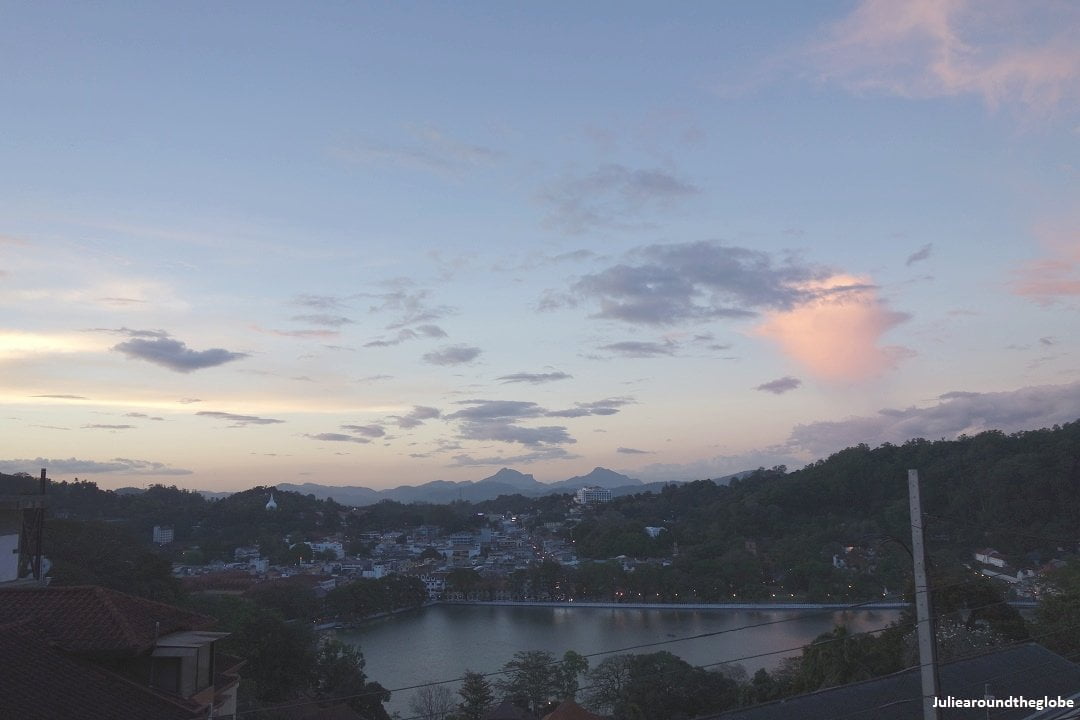 You can easily walk around the lake, it takes about an hour, you can also rent a small boat. If you want to have a nice view of the lake and city, take one of the streets going up, you’ll find plenty of restaurants with a nice view, the best time to go is for sunset.

This Botanical Garden is the biggest one in Sri Lanka, it hosts more than 4000 plant species, mostly orchids. The best time to go is early morning or after 4 pm. This beautiful and well-tended garden is definitively worth a stroll, and the orchids garden is just spectacular.

6 – Go for a walk in Udawatta Kele 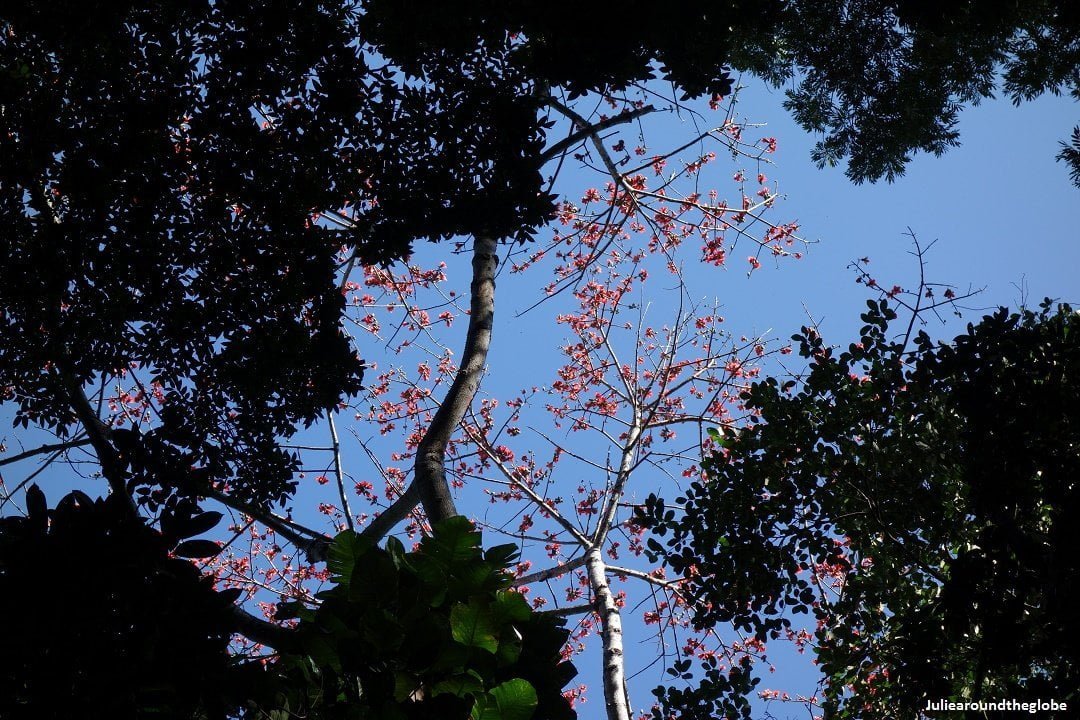 This park, not far from the city center, is worth a visit. You can easily trek around the main path, circling the park. The air is fresh, the birds are singing, and nature is appeasing. Walking under the cool shade of the trees, you will forget you’re in the heart of a big and busy city.

What to do around Kandy:

The easiest way to visit Kandy’s surroundings is either by renting a scooter or hiring a tuk-tuk for the day. Every point of interest is located in the same area, so the itinerary is simple and one day is enough to see everything.

There’s plenty of tea factories along the way, most of them offer a free tour. It’s interesting, and they will show you how tea is made. I was surprised to see they are still using old machines from the first half of the 20th century. I also learned that black and green tea comes from the same tree, only the way they process the leaves is different.

You can also visit the Ceylon Tea Museum, where they have a lot of old tea-processing machines and good exhibits on tea history in Sri Lanka.

Same as for the tea factories, there are a lot of spice gardens to choose from around Kandy, they are all made for tourists. They live from selling the products they make to their visitors. The visit is usually free, they will tour you around, show you the different plants, and explain their use. In the end, you can buy spices or the product they make, mostly natural cosmetics. If you want to buy something, just know that they overprice everything and that you can find spices for way cheaper at the market (if you find an honest seller) or even at the supermarket. The quality is the same.

3 – Do the three temples walk: 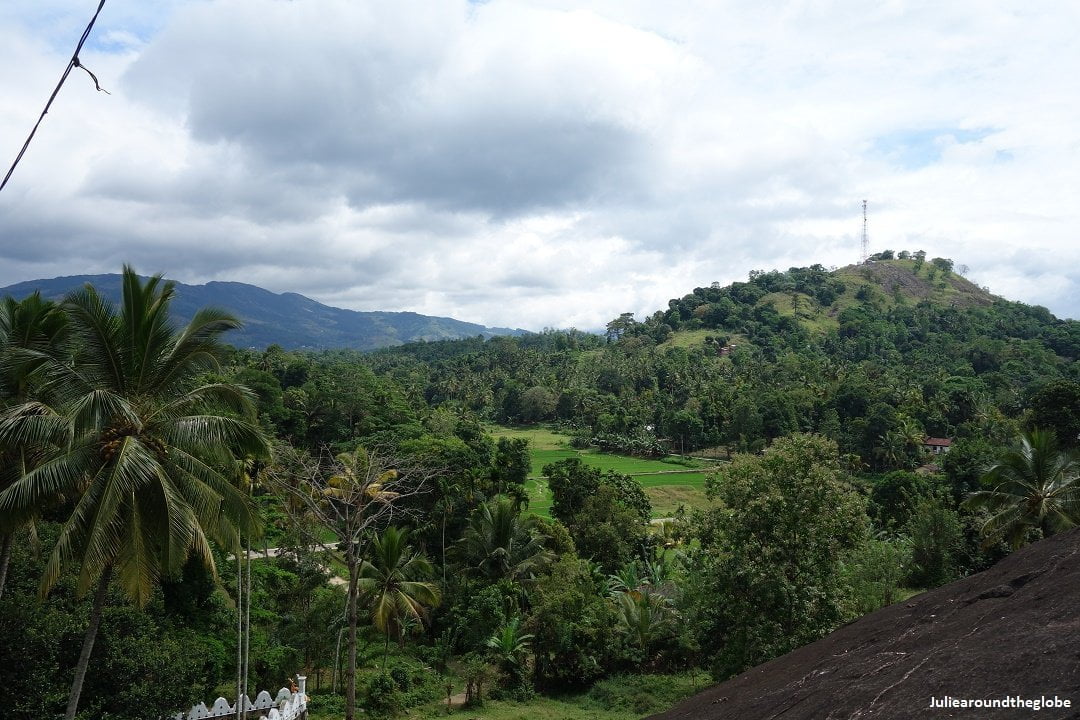 You can do this easy 2-3 hours trek through villages hills and paddy fields, or you can just drive there or ask a tuk-tuk to take you. It’s not usually included in the tours, but you can ask.

Lankatilaka Temple: This temple is made of two parts, one is Buddhist, and one is Hindu, they are not operated by the same person, even if it’s the same building, the Buddhist side is well organized with someone waiting there to greet visitors. For the Hindu side, you’ll have to find the person in charge and ask him to open the temple for you.

The temple, built in the 14th century by King Bhuvanekabahu IV, is perched on a hill so you’ll have a stunning view of the surroundings. At the bottom, there’s a wood carving shop, worth a stop if you’re planning on buying some souvenirs. 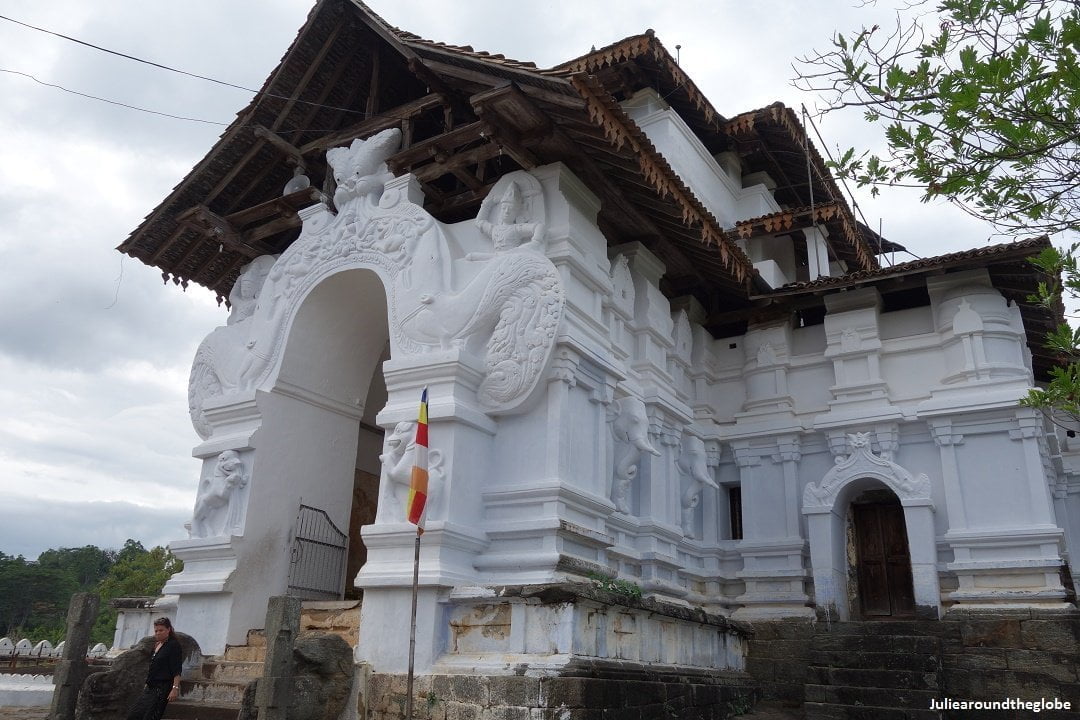 Gadaladeniya Temple: this temple is one of the biggest rock temples in Sri Lanka and was also built by King Bhuvanekabahu IV. It was built using the Dravidian architectural style while incorporating Sinhalese style from the Polonnaruwa era and some Indo Chinese patterns. 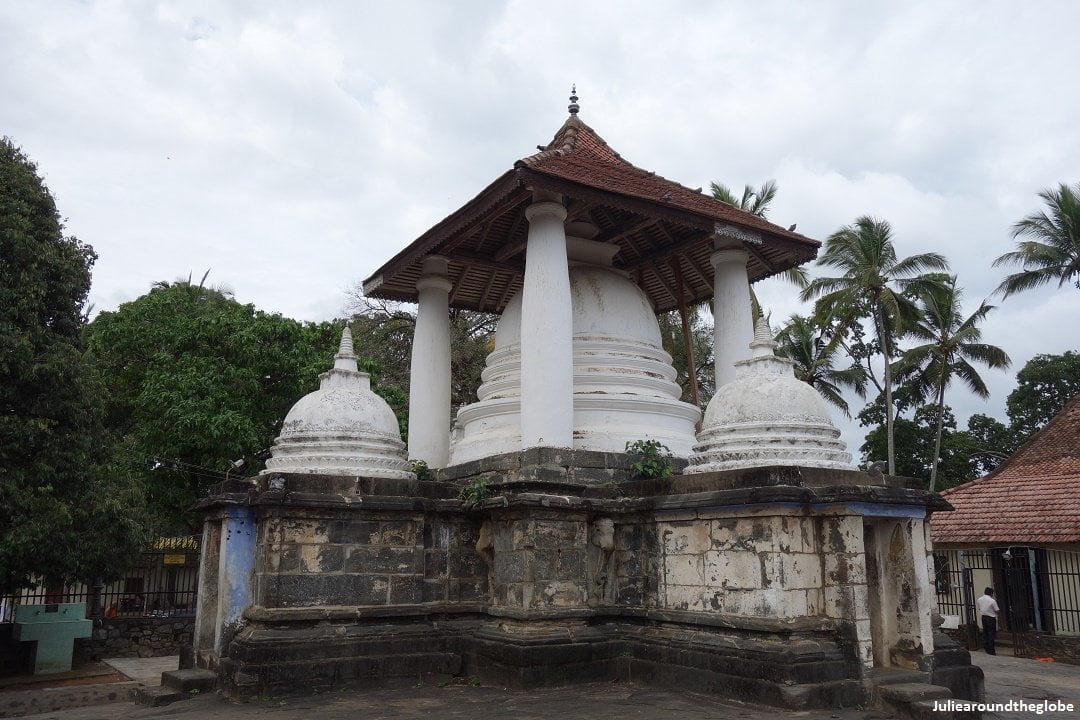 Embekka Devalaya: this temple was also built in the 14th century but by King Wickremabahu III. It is known for its unique wood carvings, which have been added to the UNESCO Heritage list. The whole temple is made of wood, and the architecture of the roof has never been seen anywhere else in the world. 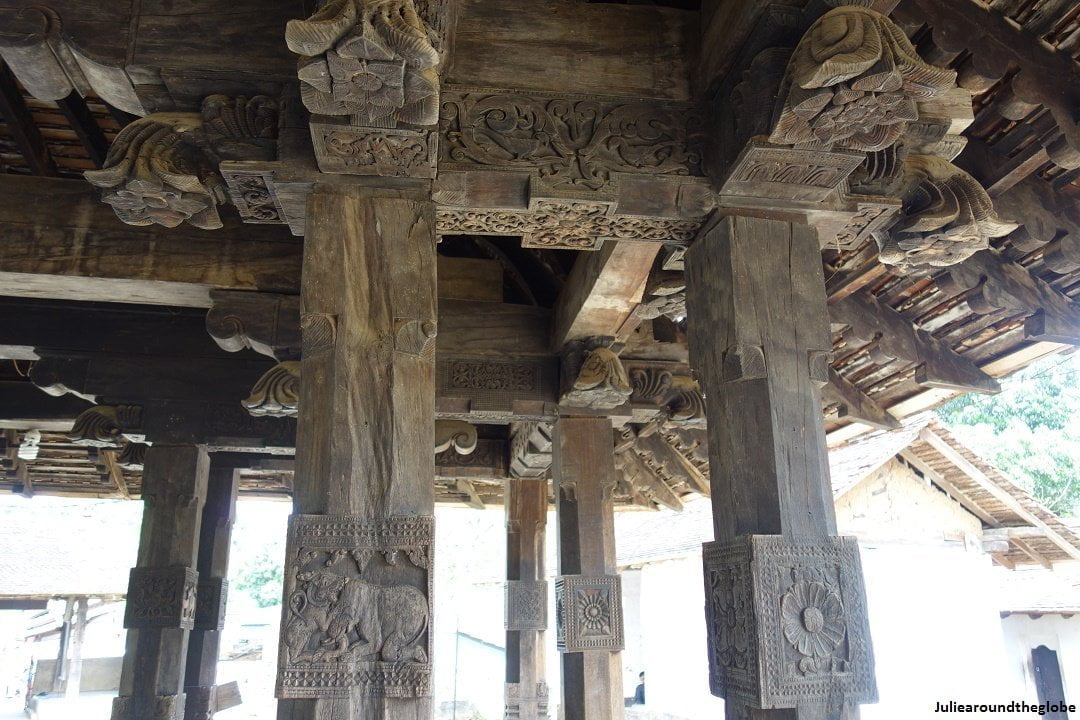 The National Railway Museum was open in 2014 to celebrate the 150th anniversary of the first train running in Sri Lanka. The museum is home to many old trains, machinery, and equipment.

If you are planning on going south to Ella or Nuwara Eliya, you must take the train, the line offers one of the most epic train rides in the world. The views are just breathtaking. 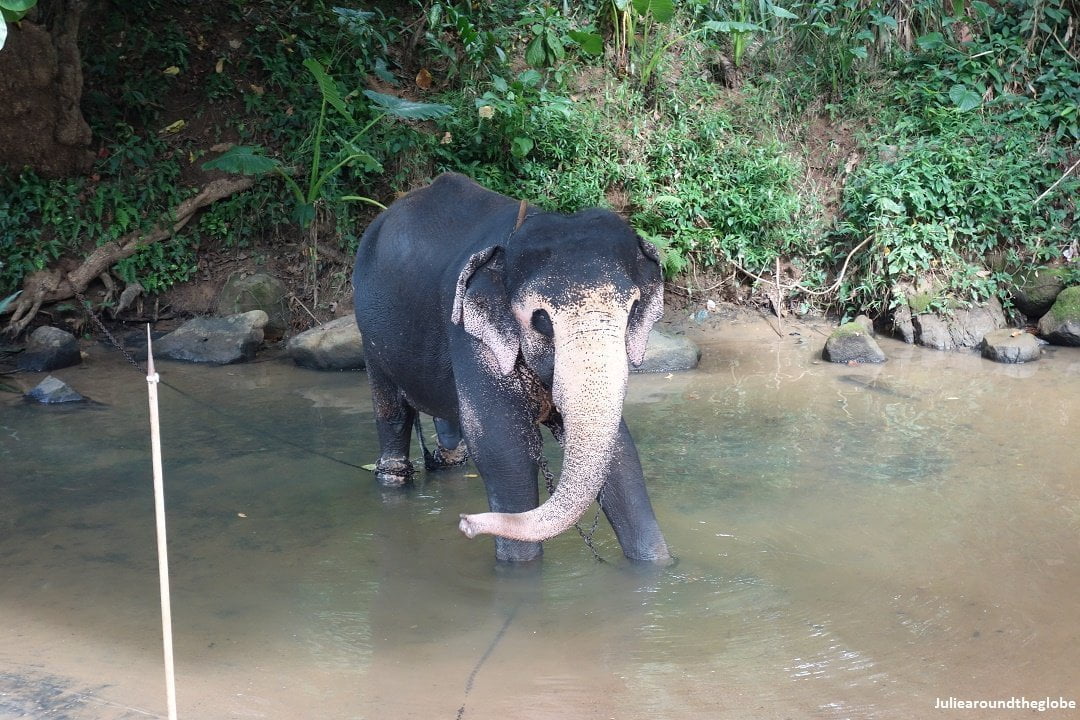 I didn’t want to include the elephants’ orphanages here, most people visit one of them, it’s usually included in the tour with the tuk-tuk. I visited the smaller one, the Millennium Elephant Foundation, and honestly, it made me a bit depressed. The elephants are chained all day, one of them was chained in the water so tourist can bathe him, so he just gets bathe all day. They also offer to ride them. This place is sad, they need the tourists so they can afford to care for them. They treat the elephants as well as they can, but overall, the situation there is bad, in my opinion.

If you want to see elephants the ethical way while you’re in Sri Lanka, check out Kaudulla National Park, where elephants are free. You can also check out the best ethical places to see wildlife in Southeast Asia.

Day 1 – Visit the Tooth Temple, the World Buddhist Museum, and take a walk around the lake. In the evening you can attend a traditional dance show.

Day 2 – Rent a scooter or hire a tuk-tuk for the day to visit the Botanical Garden, the three temple, a tea factory, a spice garden, and the Railway Museum. It seems like a lot, but if you live early in the morning, you won’t have to rush.

Day 3 – Go trekking in Udawatta Kele, then head to your next destination.

Where to stay in Kandy

I’ll advise booking something in the center or around the lake, on the hill, to have a nice view.

Check out some of the tours you can take while in Kandy: 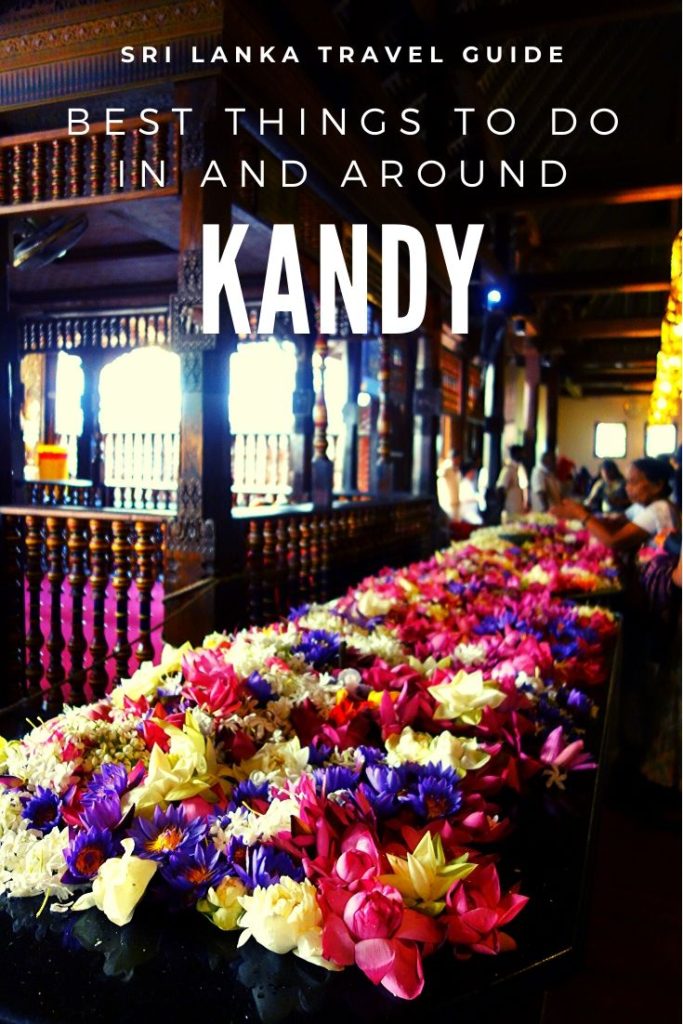