Classified as a UNESCO World Heritage Site in 1991, Dambulla’s Buddhist Golden Caves Temple was built in the first century BC and used to serve as a shelter for monks during the raining season. Called Raja Maha Vihara originally, the caves are carved from a huge granite rock and are the best-preserved and the biggest cave system in Sri Lanka. Located at the top of the rock, a steep staircase leads to the caves, on the way people sell flowers for offerings, and monkeys await to make a snack out of them. Read on to learn everything you need to know to plan your trip to Dambulla Cave Temple (opening hours, dress code, entrance fee…)

It is really common for Buddhists or Hindus to transform caves into temples.  It fits their idea of a simple life, especially for monastic life. Caves are also regarded as sacred places made by the Gods.

About the Dambulla Cave Temple

The Golden Caves Temple in Dambulla are incredibly well preserved, the murals kept all of their colors and the details are impressive, the paintings cover as much as 2 100 square meters (or 1.3 square miles). They mostly represent the temptation of Buddha by the demon Mara, and the first time he preached. There are 153 Buddha sculptures present in the caves, and contrary to most Buddha statues, four. There’s also a statue of Vishnu and one of Saman, as well as statues of kings and deities.

Additionally, to the sculptures and paintings, the rock hosts 80 caves, five sanctuaries, and four main temples. The temples were created by the Raja Vattagamani Abhaya, king of Sri Lanka, during the first century BC. He had to flee his capital, Anuradhapura, when the Hindus invaded. He took refuge in Dambulla for fourteen years with the monks, living in the caves. When he got back on his throne and reconquered Anuradhapura, he decided to create temples there and make it a pilgrimage site. Since then and until the 20th century, the cave temples have been improved little by little, creating what we can admire today.

Like in every Buddhist temple, you should cover your knees and shoulders, remove your hat and take off your shoes before entering the temple. I always recommend carrying a sarong, so you have something to cover up when needed.

Related article – Dos and don’ts of visiting a Buddhist temple

The site is open every day from 7 AM to 7 PM (the ticket counter closes at 5 PM). The best time to visit is early morning if you want to enjoy some peace and quiet or around 2 hours before sunset so you can watch it after visiting the caves.

The entrance fee for the Dambulla Cave Temple is LKR 1,500.

How long does it take to visit the Dambulla Cave Temple?

I would advise counting 2 hours, the climb is not that hard, but you’ll probably have to take a break or two on the way. There are five caves to visit and a lot to see, so 2 hours is perfect.

This cave is the last one to have been built. The construction date is unknown. Contrary to the other caves where the sculptures are made of granite, here they are made of plaster and bricks. The most notable one is the 10 meters (32 feet) reclining Buddha. Hindu and local deities are painted on the wall as well as a nobleman who is thought to have funded the construction of the cave.

This cave is the smallest one, around the wall a row of meditating Buddhas statues and some more Buddhas painted on the walls, mixed with floral and squared patterns. In the middle of the cave, stands a Dagoba (or Stupa), the damages on its side were made by burglars who thought it contained the late queen’s jewelry.

This temple construction was ordered by King Kirti Sri Rajasinha (1747-1782 AD). The two doors are guarded by carved dragon arches. The ceiling here reaches 10 meters, making it the highest cave. The reclining Buddha statue is carved out of solid rocks, as well as the meditating Buddha. It’s quite impressive if you think about the rudimentary tools they had at the time. About a thousand seated Buddhas are painted on the ceiling, 40 more are painted on the walls accompanied by 15 Buddha statues. Near the entrance, you’ll also find a sculpture of Kirti Sri Rajasinha with 4 of his attendants painted behind him.

Cave 2: Maharaja Vihara or Temple of the Great Kings

This cave is the biggest one (50 meters deep) and probably the more spectacular. It was built under King Vattagamini Abhaya but was altered many times by its successors. The cave is named after himself and King Nissankamalla. The painted wooden image of the first is located near the entrance, and the one of the later is at the far right-hand of the cave, behind a large reclining Buddha. Many wooden statues of Hindu Deities are also to be found in this cave.

The murals here are truly amazing, with a lot of details, made in Kandyan style, they depict the life of Buddha. 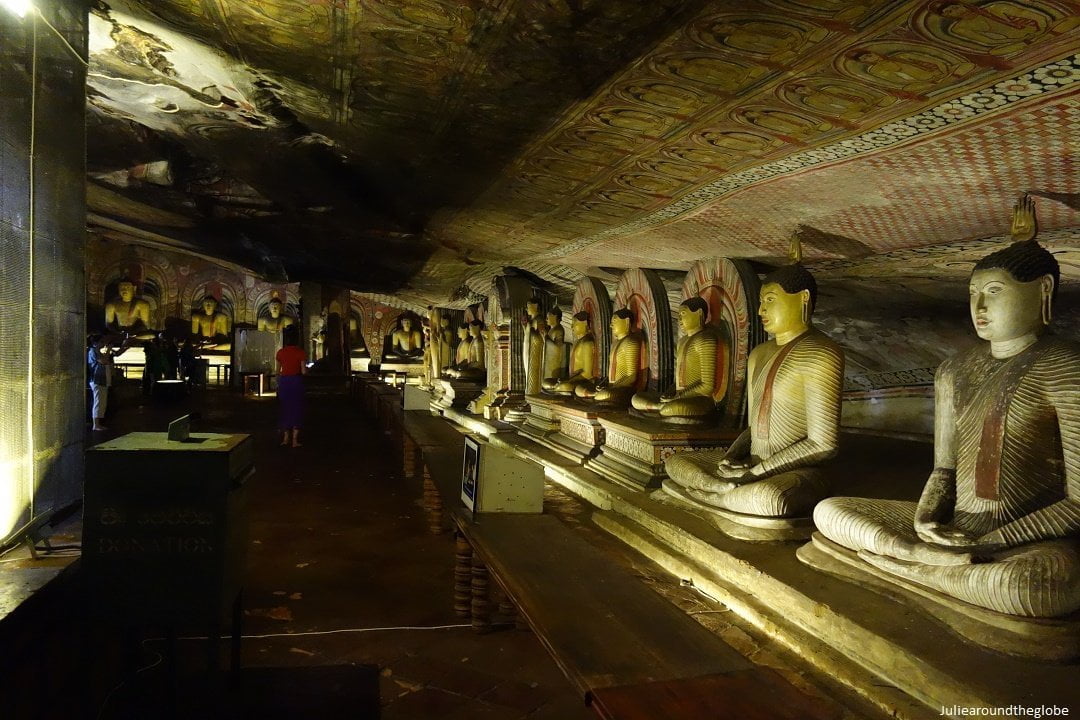 Cave 1: Devaraja Viharaya or Temple of the Lord of the Gods

This cave is named after Vishnu, who is thought to have created the cave system. Inside, you will find a 14 meter long sleeping Buddha made of solid rock. His shoulders are covered by gold gilding. The murals here are a bit fading out, they are believed to be the oldest one but constant repainting through the centuries makes it hard to tell for sure. Next to the sleeping Buddha, a statue of Ananda, one of his disciples, lay at his feet. Behind him, the brightly colored murals are a new addition from the 20th century, clashing a bit with the other paintings.

Before the entrance of the first cave, one the right side, you will find a blue chapel dedicated to Kataragama.

Other things to do in Dambulla

Apart from visiting the Cave Temple, there’s not much to do in Dambulla. One great thing to do is visiting the Kaluduya Pokuna ruins. A nice trek through the jungle will take you to this remote and unknown site. You can take a bus to the starting point of the trek then it’s about 2 hours if you take your time.

You can also easily organize a day trip to Sigiriya from Dambulla. Both are pretty close and there are frequent buses going there.

Where to stay in Dambulla

There are a few backpackers options in Dambulla as well as nicer hotels. It’s usually pretty cheap (you can find a double room for less than USD 5).

If you want to stay in a hostel, check out Bed Station Hostel Sri Lanka. It’s a great place to socialize and relax. Every bed has a mosquito net and breakfast is included.

If you want to try a homestay, check out Rock View Home Stay. All rooms have a private bathroom and breakfast is included.

If you want to treat yourself, check out Sigiriya Kingdom Gate Hotel Dambulla. The settings are great, surrounded by nature yet not too far from the city. Most rooms have views over the mountains, there are a pool and every facility you might need. Their cheapest rooms start at 40$, going all the way to 300$.

Don’t have much time? Want to go with a guide? Check out these great options:

Related articles to help you plan your vacation to Sri Lanka: