Gunung Lawu, or Mount Lawu, located near Solo in Central Java, is one of the holiest pilgrimage sites in Java. Every year, thousands of Hindus come to search for guidance and enlightenment. The temples there date back to the 14th century. Legend has it that after the Majapahit Kingdom fell to Islam and that most of the Hindus fled to Bali, the fallen king Brawijaya V went west, as his son became one of the leaders of the new Islamic kingdom. Having to choose between fleeing and fighting his own son, Brawijaya retreated to Mount Lawu where it is said he reached Nirvana.

The temples there are some of the last Javanese temples built before Java became a Muslim kingdom. They are built on the Wayang style, most of them are fertility temples, and Hindus still come here to pray and to make offerings. You won’t be able to enter the inner part of the temples unless you’re Hindu.

Apart from the temples, the view is amazing and the air is fresh. It’s the perfect place to relax for a couple of days. The slopes are full of rice terraces, tea plantations, and vegetables. If you haven’t visited a tea plantation yet, it’s a good place to do it.

What to do in Mount Lawu:

Both temples can be visited as a day trip from Solo or one of the nearby villages if you’re planning to do a homestay there. 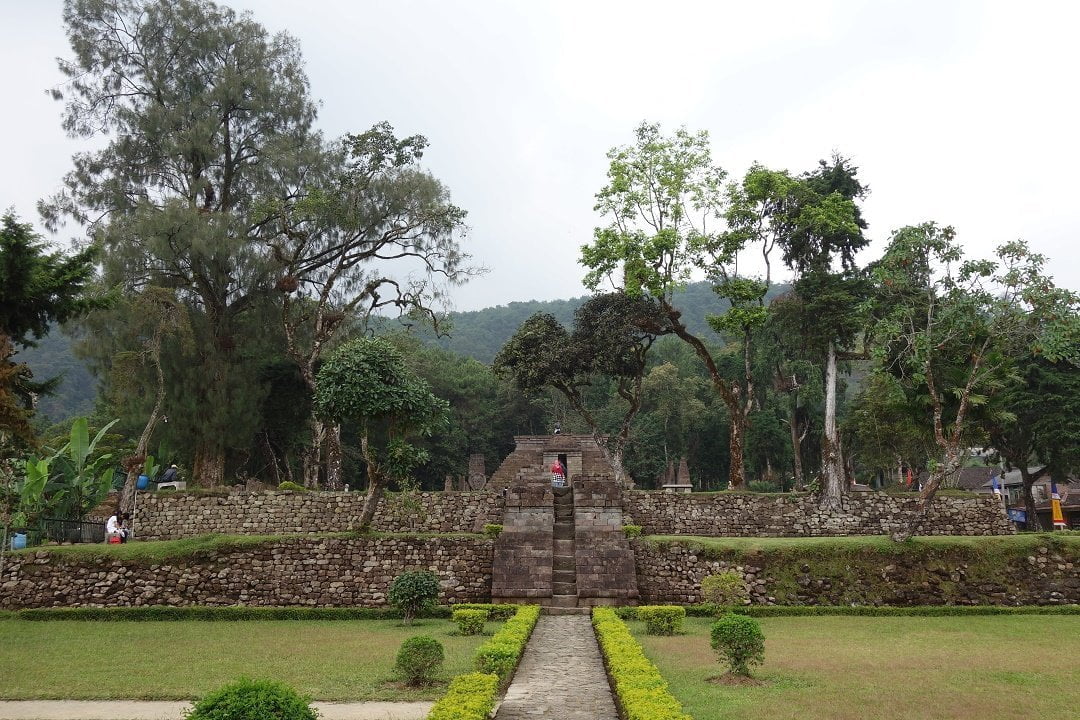 Candi Sukuh is ideally located, on a hill, facing the Solo plain, you’ll get a really nice view from there. The temple has a pyramidal shape with really nice carvings and sculptures scattered around it. It has been well maintained and restored last year. 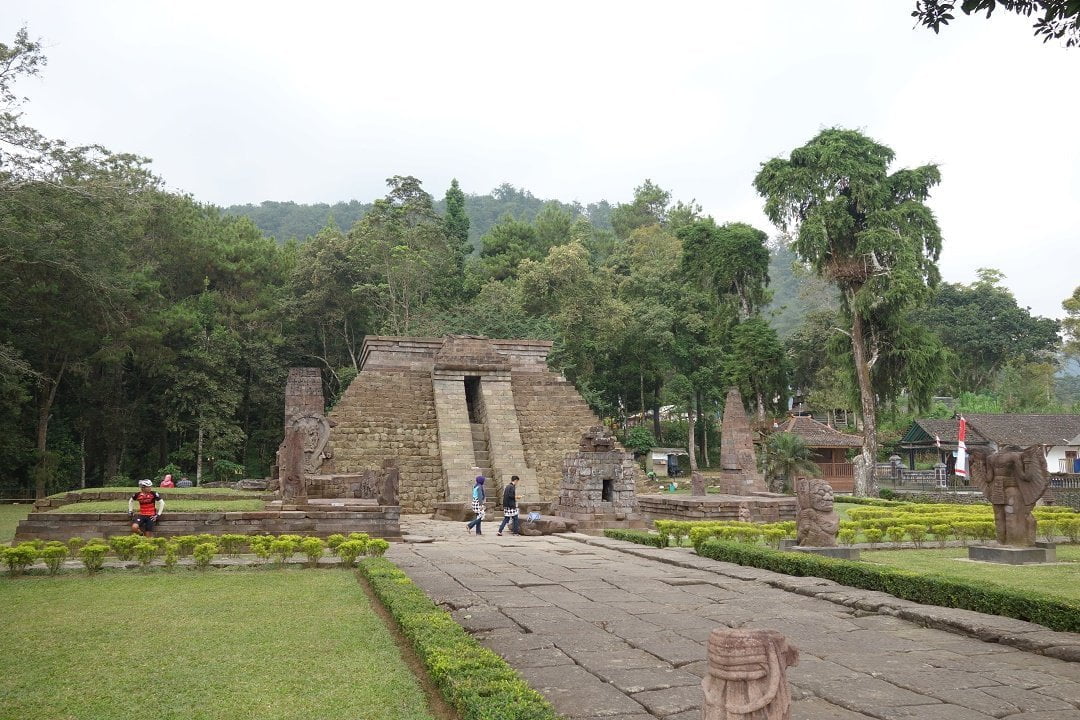 It’s clearly a fertility temple with many explicit carvings and sculptures. It was built in the 15th century in a mysterious style that cannot be explained by local experts. It resembles none of the temples that existed at the time. The origins of its builders and of the architecture is yet to be identified. The weird and distorted sculptures recall the animism style, in use two centuries ago. 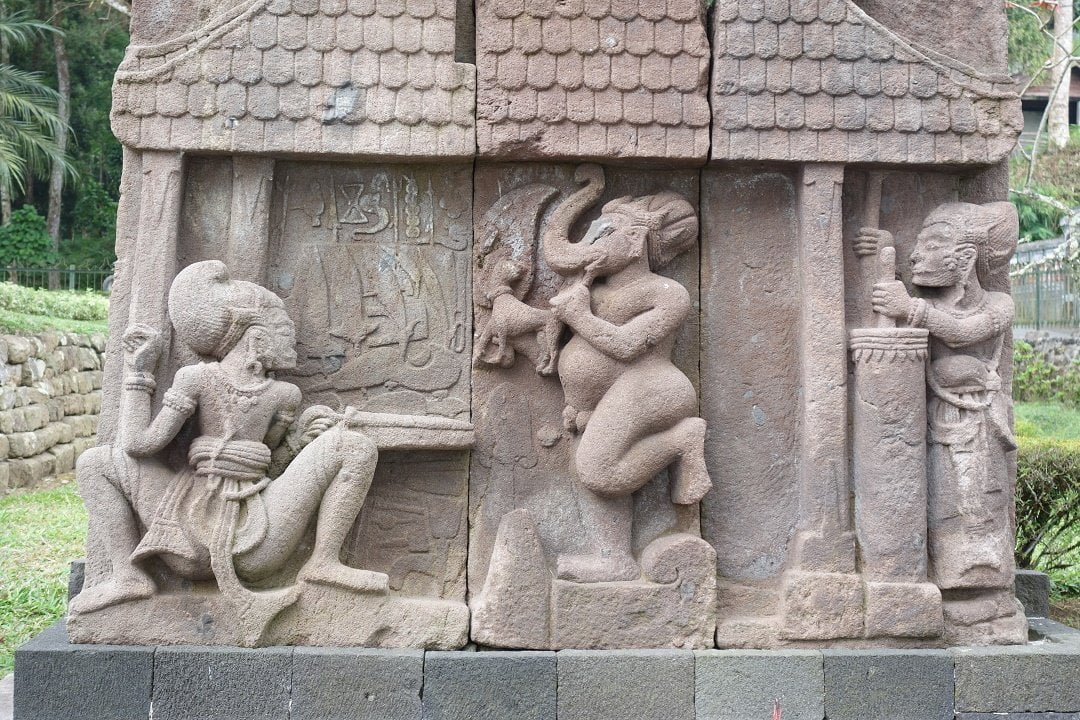 Near the entrance notice the lingam and yoni (symbolizing the male and the female), this representation was used to test if women were faithful to their husbands or virgins if they were unmarried. They had to jump across it, if their sarong (kind of traditional skirt, not sew but wrap around the waist) fell that meant they were unfaithful or not a virgin. 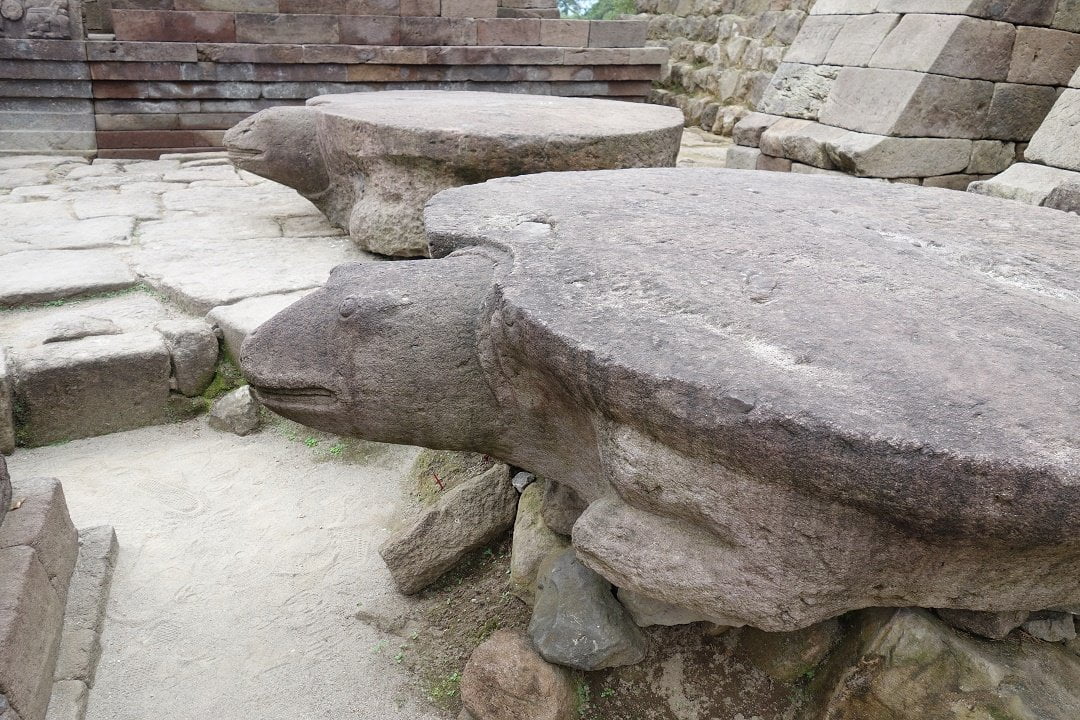 Right in front of the temple, in the courtyard, notice the three huge turtles with a flat back resembling an altar. Turtles or Kurma are usually present in Hindu temples because they symbolize the second avatar of Vishnu, it’s also because, after the cow, the turtle is the animal the most capable of attracting Sattvic waves and then releasing them into the atmosphere as needed (to not enter into endless explanations about Hinduism, let’s just say that Sattvic waves are energy coming from nature).

This one is bigger and you’ll need to climb some steps to get to the upper part. The gates have the same architecture as the one in Bali, but the rest combines fertility and Shiva worship. They are 6 levels with some small shrines and on top, the main temple built in a pyramidal shape.

This temple is still really frequented, and the village next to it is one of the last villages in Java where people still practice Hinduism. 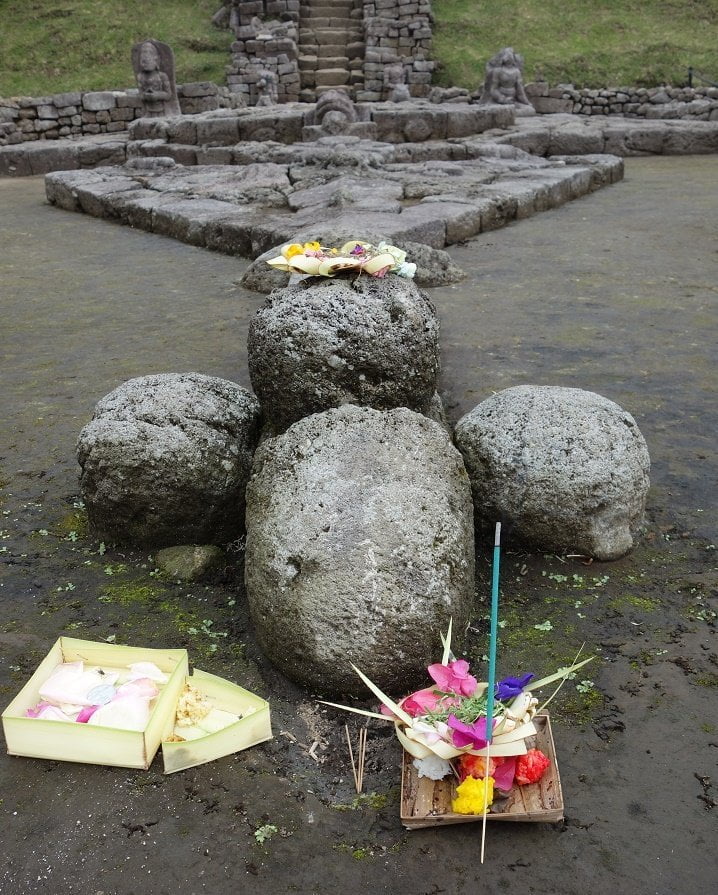 If you want to climb to the summit of Java’s holiest peak, you’ll need to be ready for a sleepless night, the climb starts at about 10:30 pm, locals start at 8 pm to have time to meditate at the top, waiting for sunrise. You can also do it during the day but there’s not much shadow and it gets really hot. The climb starts at Cemoro Sewu village and takes about 6 hours each way.

Hindus usually do the pilgrimage for the first day of the Hindu calendar’s new year or during weekends. For the new year, there are thousands of pilgrims coming from all over Java and some even from Bali.

How to get to Mount Lawu:

The best option is to hire a motorbike in Solo, the roads are good, but it’s in the mountains so sometimes it’s really steep and often with lots of turns.

You can also take a bus to Karangpandan from Solo, then a minibus to the turn-off, ask the driver, he’ll know. Then hire an ojek to take you to the 2 temples, don’t hesitate to bargain, it should be less than 100k for the two temples.

Where to stay near Mount Lawu:

The easiest is to take a day trip from Solo, if you’re planning on climbing Mount Lawu you can stay in Cemoro Sewu.

You can also stay in Tawangmangu, a nice hill resort on the other side of Mount Lawu, there are some nice treks to do there.

Related articles to help you plan your trip:

Other activities in Java: