Created in 1926 by Ngô Van Chieu (after he received a message from a spirit named Cao Dai), Caodaism is a mix of Buddhism, Confucianism, Taoism, Christianity, and Islam. The religion is based on the principles of being good and honest (from Buddhism), of being charitable and of loving others (from Christianity), of being detached from the world (Taoism) while keeping the cult of the ancestors, respect to the family and the communion between the livings and the deads. They pray to every god, spirits, genies, saints from these religions. Read on to learn everything you need to know about visiting a Cao Dai temple in Tay Ninh. 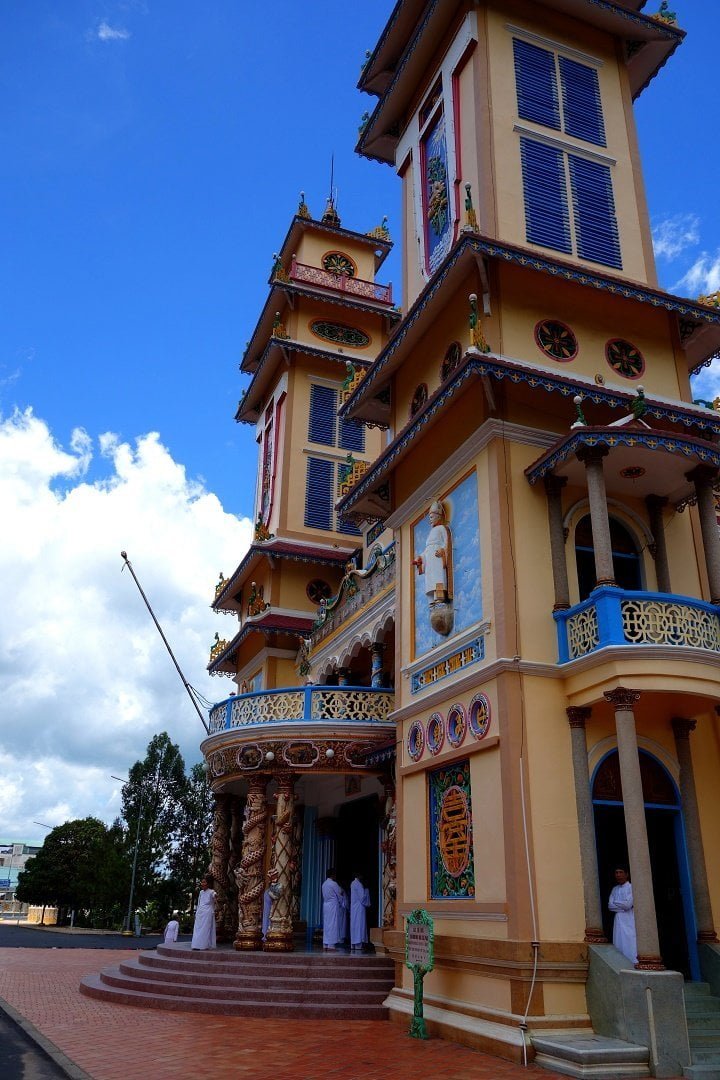 Caodaism seems to have been born from the need of conciliating Western and Asian beliefs. In less than two months after its creation, 2000 people joined it, it originated from Tay Ninh, in South Vietnam and spread to the Mekong Delta region and Central Vietnam. Today, about 2 millions people follow Caodaism.

They believe that every message from prophets has been misinterpreted or deformed by time. Every religion is fundamentally the same, serving the same god, Caodaism is the ultimate religion, and the message from God shouldn’t be misinterpreted anymore because they communicate directly with God through the spirits. 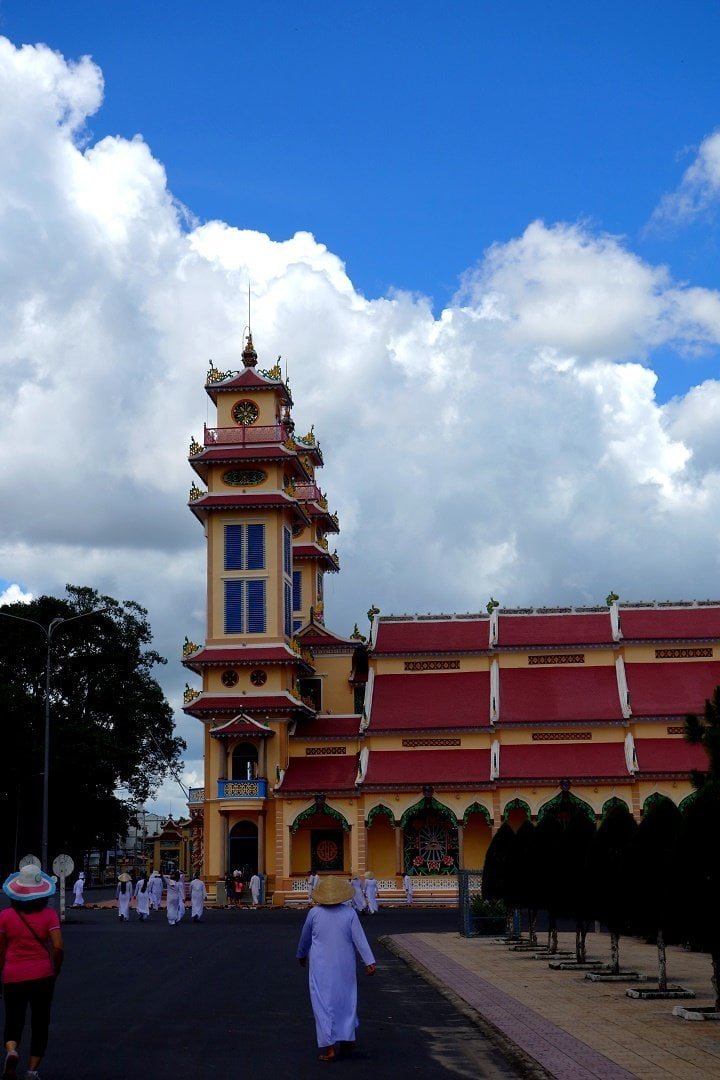 The religion is organized on the model of the Catholic Church, with an elected pope, who manage, control, and make sure of the continuity of the religion and dignitaries corresponding to priests, abbots, bishops… They also have “mediums” in charge of communicating with the spirits and sharing their messages.

There is one entrance on the right for men and one on the left for women, everyone has to dress in white, and you cannot pass in front of the Temple during mass. There are musicians and singers in the platform upstairs.

At the front, you’ll notice the dignitaries dressed in red, blue and yellow. The red dress symbolizes Confucianism, the blue one, Taoism and the yellow one, Buddhism. 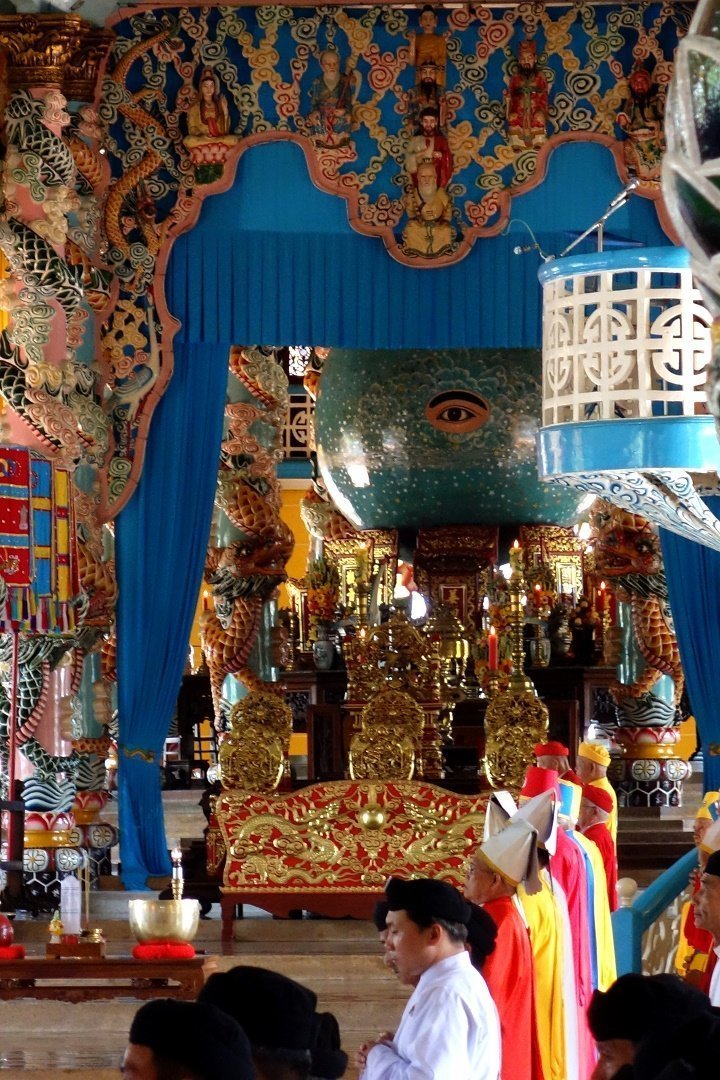 In the Cao Dai Temple in Tay Ninh, there are four masses each day: 6 am, 12 pm, 6 pm, and 12 am. They last 30 minutes. You’ll be expected to remove your shoes and be dressed properly. You can only stay in the entrance or in the balconies during the mass, if you want to wander inside, you’ll have to wait.

During mass, the followers, on their knees, pray together and make offering (flowers, fruits, drinks and incense) to Cao Dai, Ly Thai Bach, representatives of the main religion but also to the spirits, genies, saints and to famous people who communicated with the mediums, such as Jeanne of Arcs, Pasteur, Shakespeare, Lenin…

The three missionaries of Caodaism are Sun Yat Sen, revolutionary and Chinese official, Victor Hugo, French writer, and Nguyen Binh Khiem, Vietnamese poet. They are considered as Saints, and their sacred mission was to be humanity’s spiritual guide. 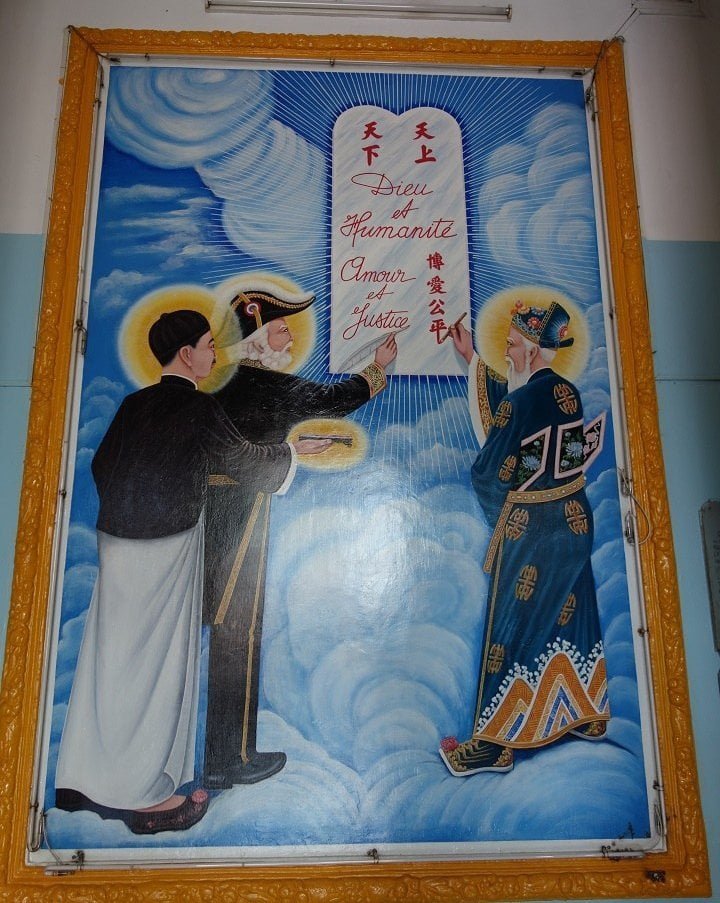 Notice inside as well as outside the symbolism of the architecture, paintings, and sculptures. The main symbol of the Cao Dai religion is an eye inside a triangle, it represents the supreme being. Near the altar, look for the huge blue sphere with the eye (see picture above) which symbolize the ideal of the universal religion. Near it are statues of Buddha, Confucius, Lao-Tseu (father of Taoism), Jesus, Ly Thai Bach, Kuong Tu Nha, Quan Ann (goddess), and Quan Cong (genie). The nave is divided into 9 parts, as there are 9 steps to reach Heaven. 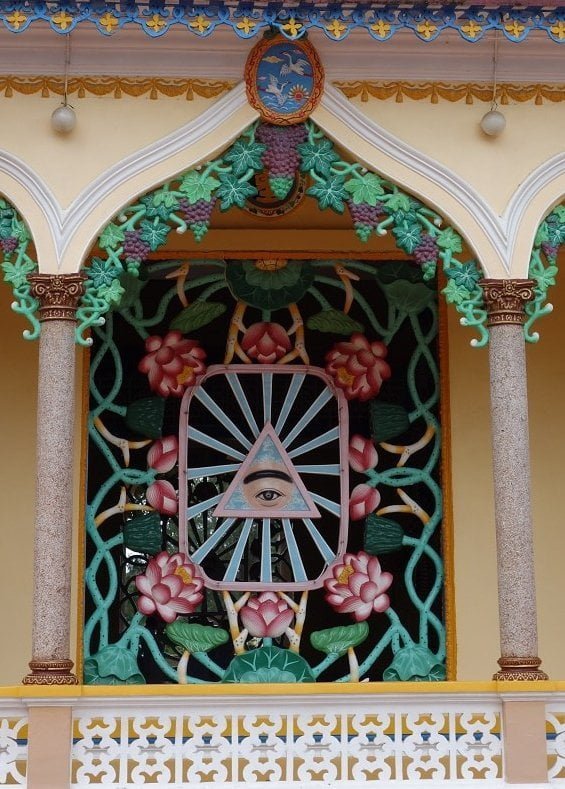 How to get to the Cao Dai Temple in Tay Ninh:

You can get to Tay Ninh on your own by bus (you’ll have to take 2) from Saigon and then take a taxi or walk to the temple.

You can also book a tour from one of the travel agencies in HCMC. They often couple it with a visit to Cu Chi Tunnels, I booked my tour with the Sinh Tourist for about 10 dollars. Their guide was super knowledgeable and informative.

There is also a temple in Da Nang, in the center, you can visit it and attend mass.

Want to learn about Vietnamese culture? Check out this post about meeting ethnic minorities in Kon Tum. 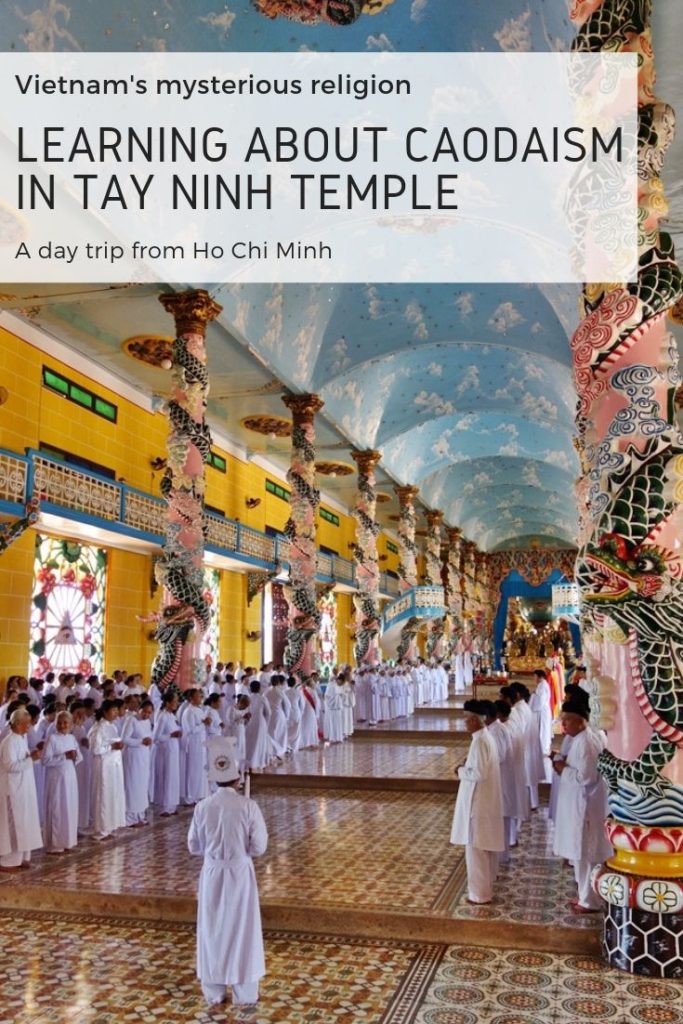