Bulla Regia, a quiet little town between Tunis and the Algerian border, hides many treasures. Bulla Regia is more than 2000 years old, and in its heart, you’ll find an incredibly well preserved archaeological site. Get ready to discover one of Africa’s oldest city and learn about the ancestor of air conditioning.

Before being a Roman city, traces of Berber and Punic culture have been found dating back as far as the 4th century BC. During the second Punic war, in 203 BC the city becomes part of the Roman Empire and 50 years later becomes the capital of the Numid Massinissa Empire. From then on Bulla will be known as Regia (Royal). Little by little, the city falls under Roman influences and becomes a true Roman city. Around ten centuries later the town is abandoned after a long period of slow decline.

Bulla Regia is rediscovered at the beginning of the 20th century, and only 10% of the site has been excavated yet. From the Punic city, nothing remains, from the Numid period, you’ll notice the orthogonal architecture based on the Greek model. Most of the monuments still standing today are from the Roman period and date back to the 2nd and 4th centuries.

One of Bulla Regia’s highlights is its mosaics. The most intact ones have been transferred to the Bardo Museum in Tunis, but a lot of them are still there. At first sight, they look dull and all broken up, but as soon as you pour some water on them, the colors will revive, creating an enchanting view.

Another original feature is the way wealthy Romans built their homes; you won’t find similar houses anywhere else in the world. To protect themselves from the heat in summer and the cold in winter, people constructed the buildings with an underground floor, creating the first air conditioning system in history. This way, the temperature inside the houses were always the same. They also built an ingenious water system, allowing them to have water in the underground part of the house. The private buildings there used to have a ground floor, but an earthquake broke most of it, revealing the underground portion of the structures.

The site also has several well-preserved public buildings such as la Maison de Chasse (Hunting House) where you’ll find one of the biggest and most beautiful mosaic, the Treasure House, an amphitheater still in use today, the ruins of a church with a baptismal basin, and the Apollon Temple. In the private houses, you can see some tombstones and the way architects arranged the houses with commodities, kitchen, bedrooms, and so on.

If you want you can hire a tour guide for a couple of dinars. They usually will find you first. Make sure they can speak proper English I would advise hiring one as most of the underground houses are not easily found and the guides usually have a good knowledge of the place and its history.

Entrance fee: 7 dinars for foreigners, free for Tunisians. Closes at 5 pm during winter and 7 pm in summer.

This area is not known for its gender equality mindset; here most women don’t leave the house unaccompanied. So try to have at least one man in the group.

Only a 20 minutes drive away from Bulla Regia, you can also visit Chemtou archaeological site.

Spreading over 80 hectares, Chemtou was famous for its golden marble quarries, the most precious marble during the Roman Empire. Initially built by the Numides in the fourth and fifth centuries BC, it was then known as Simitthu. The ruins you’ll see date back from the Roman period, and excavation work is incomplete. Most of it is still underground, but you’ll be able to see some impressive buildings and infrastructures. The quarry in itself is also really nice. Some of the site most striking features are the Numidian tombs, the bridge and mill, and the amphitheater. From the main road, you can also see the remnants of an aqueduct.

Unfortunately, the museum is closed (since 2014) probably due to a lack of visitors and fundings. The site is only worth visiting if you’re in the area.

To get a detailed map of the main ruins, visit this website and go to the area section. The ruins are scattered here and there and might be hard to find without a local guide or a map.

Advice: try to find a local to accompany you, especially if you’re a female solo traveler or an all-female group and bring closed shoes as you’ll have to walk through the fields.

You can visit Bulla Regia and Chentou as a day trip from Tunis. It’s doable by public transportation but it’s far from being the easiest way. I recommend renting a car or booking a tour. 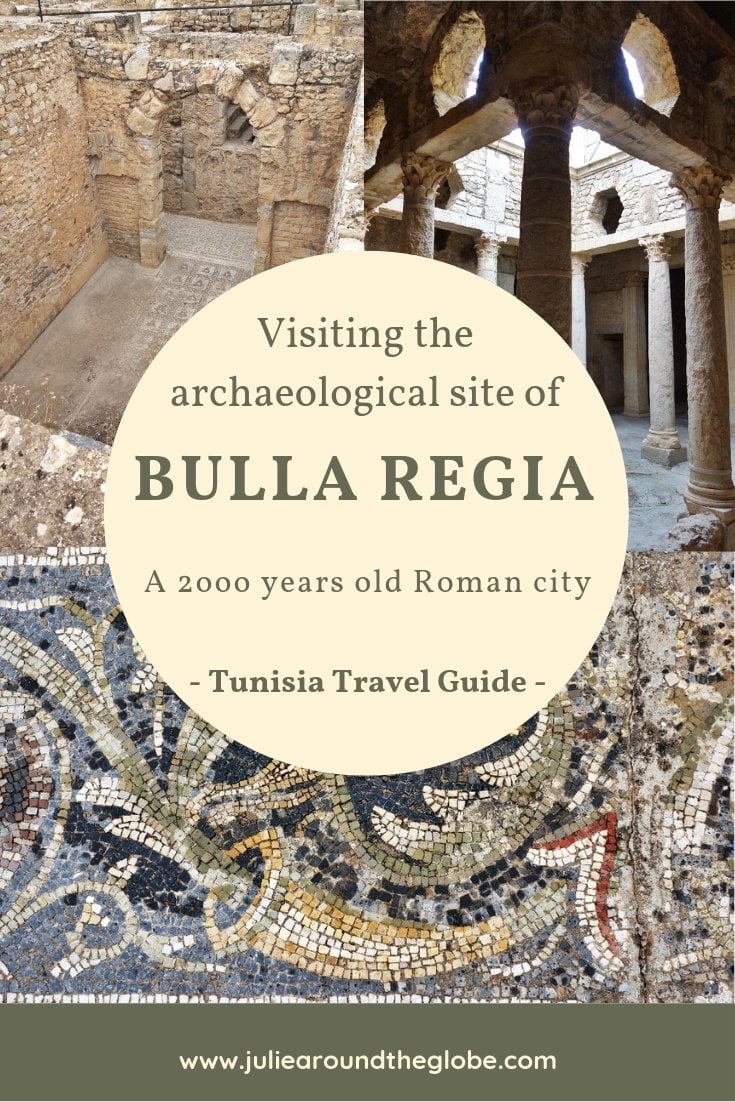