Thailand is Asia’s number one destination, each year its amazing beaches and rich culture attracts more and more visitors. Dubbed the country of smiles, Thai people are usually really hospitable and nice (except when they’re sellers and realize you’re not going to buy anything). Thailand is a place to relax, party, eat and live great experiences.

Here is everything you need to know before visiting Thailand: 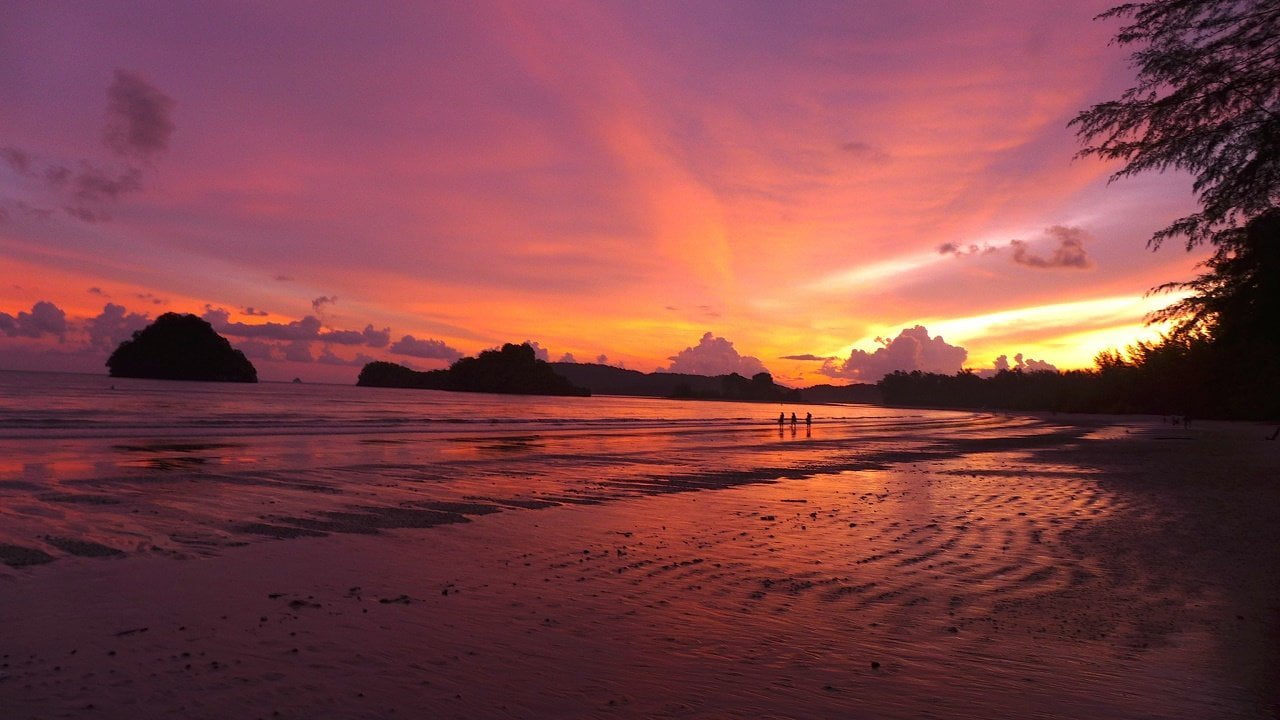 Thailand is a big country with so many amazing places to visit. If you want to enjoy the beach and party, head for the south.
Among the most famous islands, you’ll find Koh Samui, Koh Tao (the cheapest place in the world to get your PADI certification), and Koh Phangan (famous for its huge full moon parties) on the west coast. On the east coast, Koh Phi Phi is the perfect party island, it’s also famous because the movie The Beach was filmed there. More in the south, Koh Lanta is more of a destination for families. Going south again, you’ll find Koh Lipe, an incredible island, right across it there’s an almost deserted island and you can camp there. But be careful, the island is close half of the year to minimize tourism impact.
Phuket is also a tourists’ hot spot, to me, it’s the most disgusting place I’ve ever visited. In my opinion, unless you come to Thailand for prostitutes you can skip this island, or at least avoid Patong.
If you’re more into nature and lush jungles head for the north, there are plenty of national parks there to visit. It’s also where you’ll get a more authentic feel of Thailand, with a lot of remote villages, fewer tourists in most parts, and rich culture. 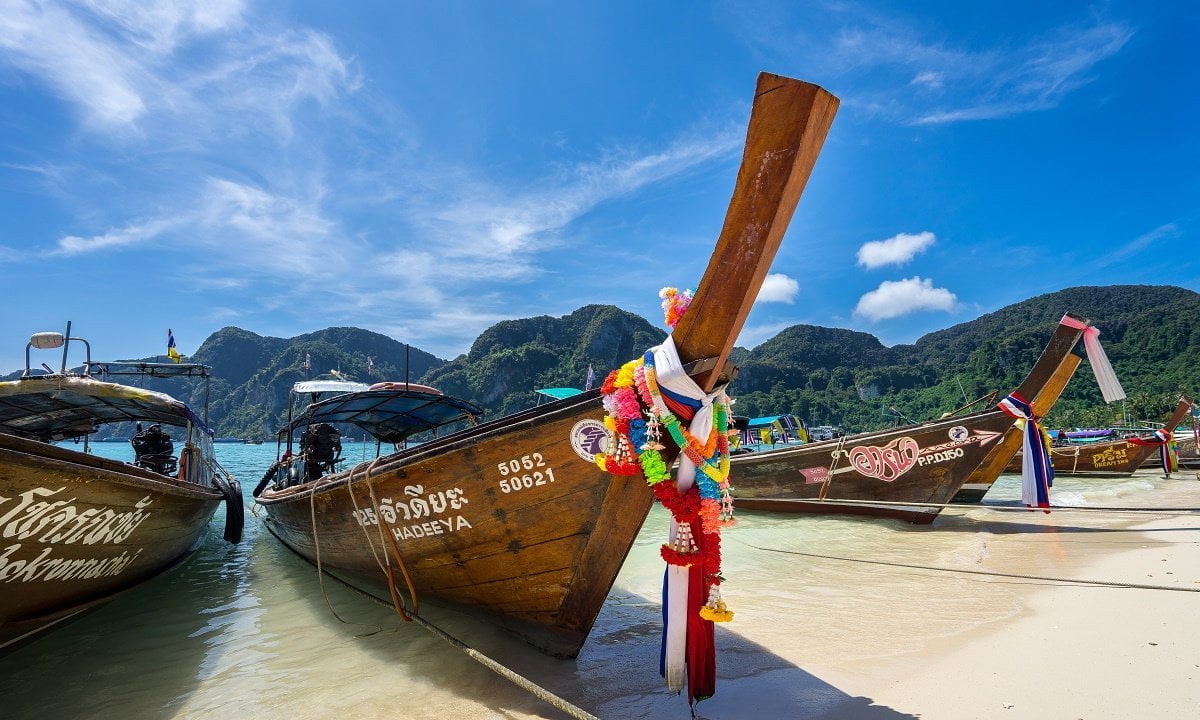 Most places in Thailand are packed with tourists, especially the most beautiful destinations. But there are still some places that are worth going to and where you won’t see many tourists. The east coast, in the south, from Nakhon Si Thammarat to the Malaysian border is not often visited, but the beaches there are really amazing and there are also a couple of attractions inland that are worth going to.  The whole deep south is also deserted by tourists due to the conflict going on there but it’s still a great place to visit.

In the north, head for Isaan region, this region is way less visited. Near the Cambodian and Laotian borders, Issan is more remote and most people there are farmers. Sangkhom is a nice city near the Mekong river, worth a couple of days, enjoying the relaxed atmosphere and soaking in a more traditional way of life. In Isaan, you’ll also find Thailand’s oldest temple: That Phanom. There are also several National Parks in Isaan. Nan Province is also a great place to visit with 6 National Parks to choose from. 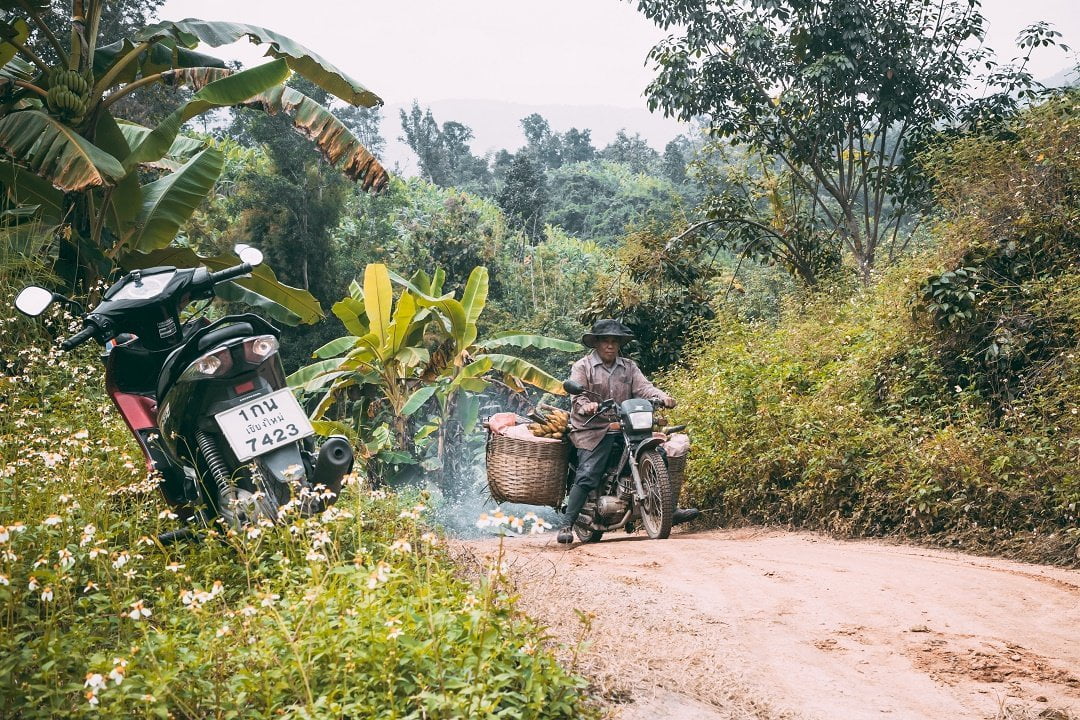 The best time to visit Thailand is between January and March. The seasons in Thailand are numerous and depend on the area you’re in.

In the South, the southwest monsoon brings rain on the west coast from April to October. On the east coast, the rainy season runs from September to December.

What to eat in Thailand

The food in Thailand is super tasty and also really spicy. My favorites are the green curry and the mango salad. Pad Thai is also an all-time favorite. If you like sweets, they make a type of pancake with bananas, chocolate, peanuts, and condensed milk, you’ll find it as street food (spoiler alert: not good if you’re on a diet). They also sell cut fruits everywhere which is so great with the hot weather.

Thai food is usually full of flavors. People use a lot of spices and herbs, and usually, it’s super easy to find veggies. If you’re vegetarian or have allergies, be careful, they tend to add shrimps everywhere.

You’ll find a lot of street food and night markets in Thailand. Try to check out a floating market, some of the boats often sell food directly cooked on the boat, a great experience. 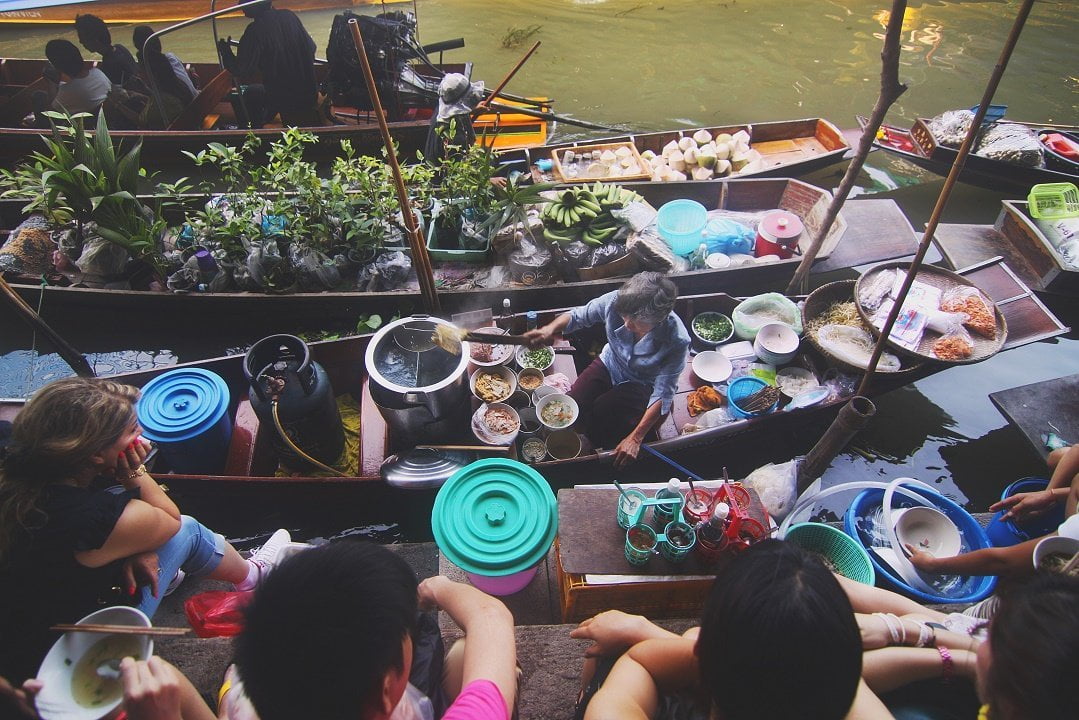 Thailand’s most famous event is the Songkran Water Festival. Held every year between the 13th and the 15th of April, to celebrate Thai’s New Year. Tradition wants that people throw water at each other to celebrate the new year and bring good luck. During this time, leave your cell phone and camera at the hotel or bring a dry bag.

Another important event celebrated nation hide is the Loy Krathong Festival. Each year, around November, Thais make a Krathong, a small raft or floating basket,  usually made of banana leaves. On it, is included incense, flowers, a candle, some hair or nail from the person making it, and some coins. Once done, the candle and the incense are lightened, a wish is made and the Krathong is set afloat. The Krathong carries away bad luck and symbolizes new beginnings.

An important Buddhist holiday is for Asahna Bucha Day, celebrating Buddha’s first sermon. Usually held in July or August, most Buddhists will donate candles to the temple and parade in the streets, with each participant holding a candle. Another way of celebrating the event is by performing the candle ceremony, called Wian Tian. The Buddhist will walk around the temple, holding a candle, incense, and a lotus flower.

There are much more local festivities held each year such as the Bo Sang Umbrella and Sankhampaeng Handicrafts Festival in Chiang Mai (January), the Chinese Lunar New Year, the National Muay Thai Day, the Pattaya International Fireworks Festival in June, the Phi Ta Khon Ghost Festival and much more…

Note: most events are based on the lunar calendar, so the date may change from a year to another. 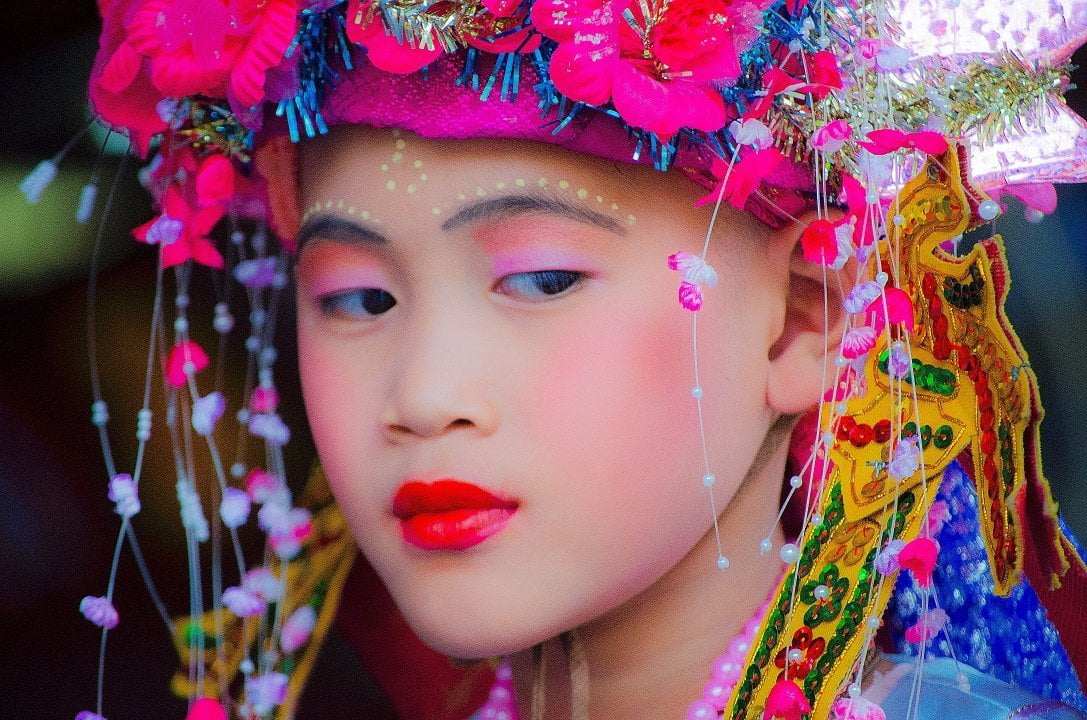 Getting around in Thailand is pretty easy, the roads are usually in a good state and the means of transportation modern. To travel between islands the connections are good and the boats are usually fairly new. Ferries are rare though.

Inland there are a lot of buses, also modern and comfortable, keep in mind that distances are great in Thailand. You can also opt for the train for some destinations, but it doesn’t go much faster than the bus. Another common way of getting around in Thailand is through hitchhiking, many backpackers do it and get picked up easily.

In cities, you can use tuk-tuks or moto-taxis, always agree on the price first. You can also use Grab (same thing as Uber) in bigger cities. 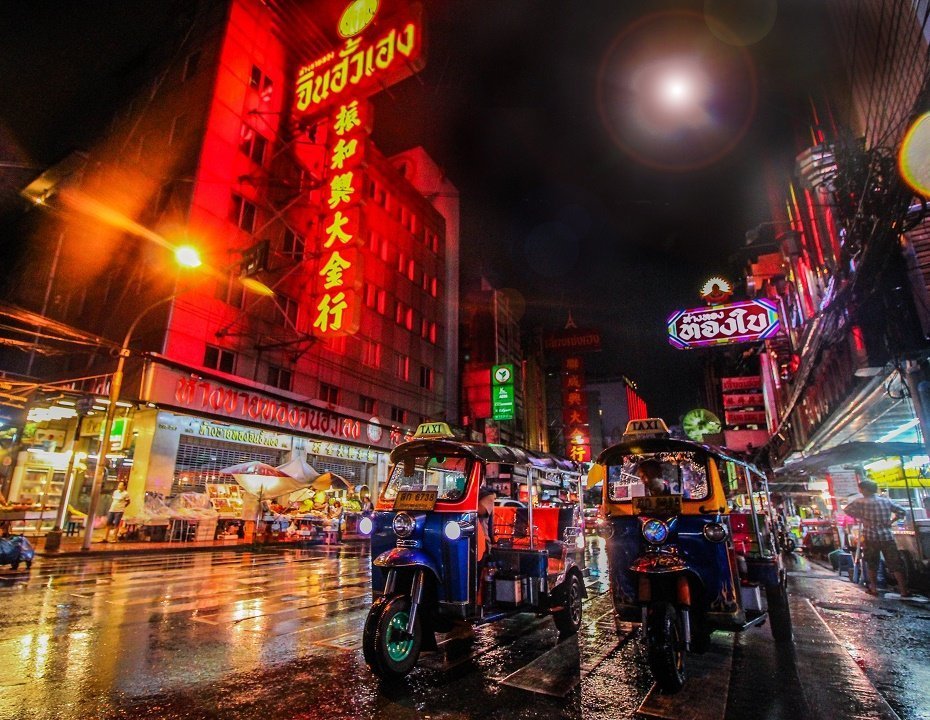 February 22, 2020
Are you thinking of traveling to Thailand? Here is a complete guide on how to spend 10 days in Thailand. From centuries-old temples to pristine …
Read More

Krabi Itinerary – How to spend a perfect vacation

May 15, 2019
Krabi is one of my favorite destinations in Thailand. The city is nothing exceptional, but its surroundings are spectacular. From Kayaking in turquoise mangroves to …
Read More

April 1, 2019
Thailand counts more than a hundred national parks, protected areas, and wildlife sanctuaries. Most of them are paradises on earth and offer spectacular scenery and …
Read More

June 18, 2018
Have you dreamed of Thailand’s perfect beaches without any tourists? Are you looking for an authentic experience away from hoards of foreigners? Well, if you’re …
Read More